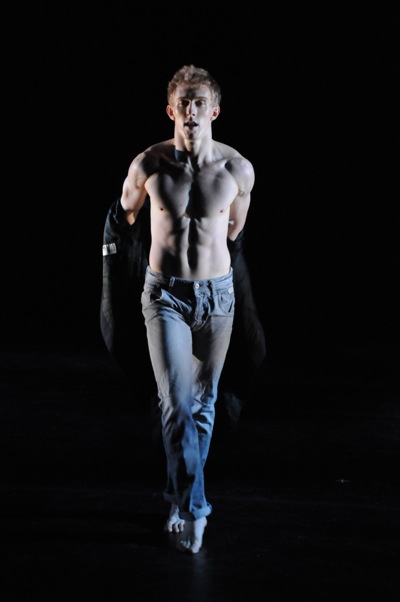 NC State’s already cozy Titmus Theatre became even more intimate with the performance of Nicholas Leichter Dance’s “Twenty Twenty.” This work juxtaposed African-American dancer/choreographer Nicholas Leichter against his younger, fairer-skinned protégé, Bryan Strimpel, in an exploration of gender and sexuality in popular culture. Though the work’s program notes emphasized the men’s different appearances and ages, it was clear that in both body and spirit, Leichter and Strimpel were harmonious.

A series of duets and solos made clear the different choreographic roots of each dancer. In solos, Leichter’s funk-contemporary fusion gave an occasional nod to Michael Jackson’s signature moves, while Strimpel preferred to live in the modern-contemporary world.

Leichter and Strimpel adapted to one another’s styles well in duets, and with the exception of a single hopped turn from Leichter early in the show, the breadth of choreography was executed flawlessly. When appropriate, Strimpel and Leichter exchanged smiles onstage, expressing the joy of dancing with partner who is energetically in synch. The men left their relationship to one another undefined, leaving the audience to question if they were brothers, friends or lovers.

From an aesthetic standpoint, “Twenty Twenty’s” unison choreography made evident the superior extension and flexibility of Strimpel’s body and drew attention to his fluid movement quality. This was especially true during his solos; one showcased the entrancing ebb and flow of fluid arm manipulation and the other highlighted his modern dance training with repetitive sweeping floorwork. Leichter’s strengths lay in clarity of direction and precise weight placement, in addition to fierce focal intention and energetic integrity.

In a solo set to “Ghetto” by Terius Nash, Leichter explored the boundaries of masculinity and femininity through fashion and movement. The dancer began in laceless gym shoes with lazy tongues, dark sunglasses and a hoodie but changed mid-section to a tight purple shirt and sparkly booty shorts. But what began as gritty hip-hop choreography quickly became an erotic romp. With a swing ’round the pole, a deep squat and a wayward lick, Leichter transformed himself into a sexual object and the audience into voyeurs. But before viewers could define how the turn of events made them feel, Strimpel sauntered onstage in an unbuttoned coat and tight jeans.

And here’s where things got hairy — in an ethical sense. Strimpel’s incredible physical form and his male stripper-esque costume, when paired with pelvic thrusts and a pantomimed sex scene created a palpable, positively charged sexual tension in the room. This begs the question — why was this section, which arguably created the same amount of objectification as Leichter’s solo, somehow more comfortable for the audience to view than Leichter performing a feminine pole routine? Was the adverse reaction to the previous section a result of the content itself, or a result of the gender norms that it reversed?

These questions were omnipresent for the remainder of the evening, which showcased Leichter and Strimpel in both highly sexualized and platonic duets set to everything from the gritty tracks of Terius Nash (“The-Dream”) to the hypnotic house beats of Lil Louis and the World. Even Beyoncé’s pop hit “Countdown” made an appearance at the end of the show, because, let’s be real, you can’t do “Diva” without her.

At the end of the night, “Twenty Twenty”ultimately made an artistic statement and, more importantly, an artistic inquiry. Where are the boundaries for gender and sexuality? Why and when are they drawn? How are they portrayed in mass media and how do we, as individuals and as a culture, absorb and interpret them? We’ve seen Leichter and Strimpel’s responses to those questions embodied onstage, so now it’s our turn to respond.