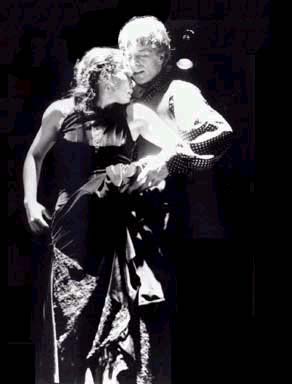 Flamenco has its own brand-identity, a marketing advantage; it&#146;s one big cliche. A moment of tortured writhing and stomping feet is a laughable soundbite that serves, on TV anyway, as "Spanish". An evening with Noche Flamenca, the Madrilleno troupe was a slap in the face to all that, a wake-up call. Get real. You have to stop thinking like this. Cliches are traps.

The form dates back to the 15th Century. In Andalusian Spain, Jews were being massacred, the Gypsies humiliated and persecuted, the Arabs exterminated, other groups expelled and exploited. Does anything change? The music, the song, the rhythm are the thing. Yet Flamenco engages and satisfies because it is performance. A woman in a red dress, sex and death, intensity that spills over into movement. Whole centuries of suffering are represented by the dance, and yet the dancer is as intensely self-involved as a lover on-the-brink. The world is a vile place. The body survives.

"La Plaza" introduced the Noche Flamenca cast, two guitarists, two Gypsy King-style singers, three dancers: two dresses and a stud. A semi-circle and seven chairs gave them the context to introduce the form: music, then song, then rhythm, finally dancing. It was a "Welcome to Our World" piece, choreographed by Martin Santangelo, all lightness and humor, a walk in the park. Butts and shoulder and sense of play intruded into the standard snake-coil of movement the dancers employed the rest of the evening. Santangelo offered a theatrical package, a seamless flow of lighting changes, songs, a flamenco travelogue. There was a well-paced range of traditional rhythms, and dances that played off thematic qualities of male and female, together and apart.

Of the three dancers, Soledad Barrio, the co-founder of the company, was clearly the final word. Older and wiser than the very attractive Isabel Byon and the chunky, earthbound Antonio Rodriguez, her final solo, "Siguiriya," was a deep song that burned into memory. Her performance, throughout, read experience. Her age added impact.

Here, dance is not about youth and technique, physical feats of daring, perfect balance, multiple turns. Virtuosic bootwork, and machine gun heel-rapping was on display, but clearly, flamenco is more about real life than that. It was also a departure from a dance experience with numbers of movers creating spatial design. In flamenco, like Butoh, dancers are individuals who rarely cut through space, they stand their ground. Movement travels to the gut before the eye.

Guitarists Jesus Torres and Paco Cruz mainly played the Spanish guitar as a rhythm instrument, with interludes that were lyrical. Their song was sometimes the only softness, a balance to all the wailing and clapping. And as they continually got up from one chair and moved to the next, it was clear that they, along with the crusty, black-suited singers, were dancers too. There were lighting changes, songs that began and ended, different rhythms and fresh dancers who kept rotating. Santangelo has a knack as a director; things moved along. Like a bull fight, Noche Flamenca offered one intense event after another.