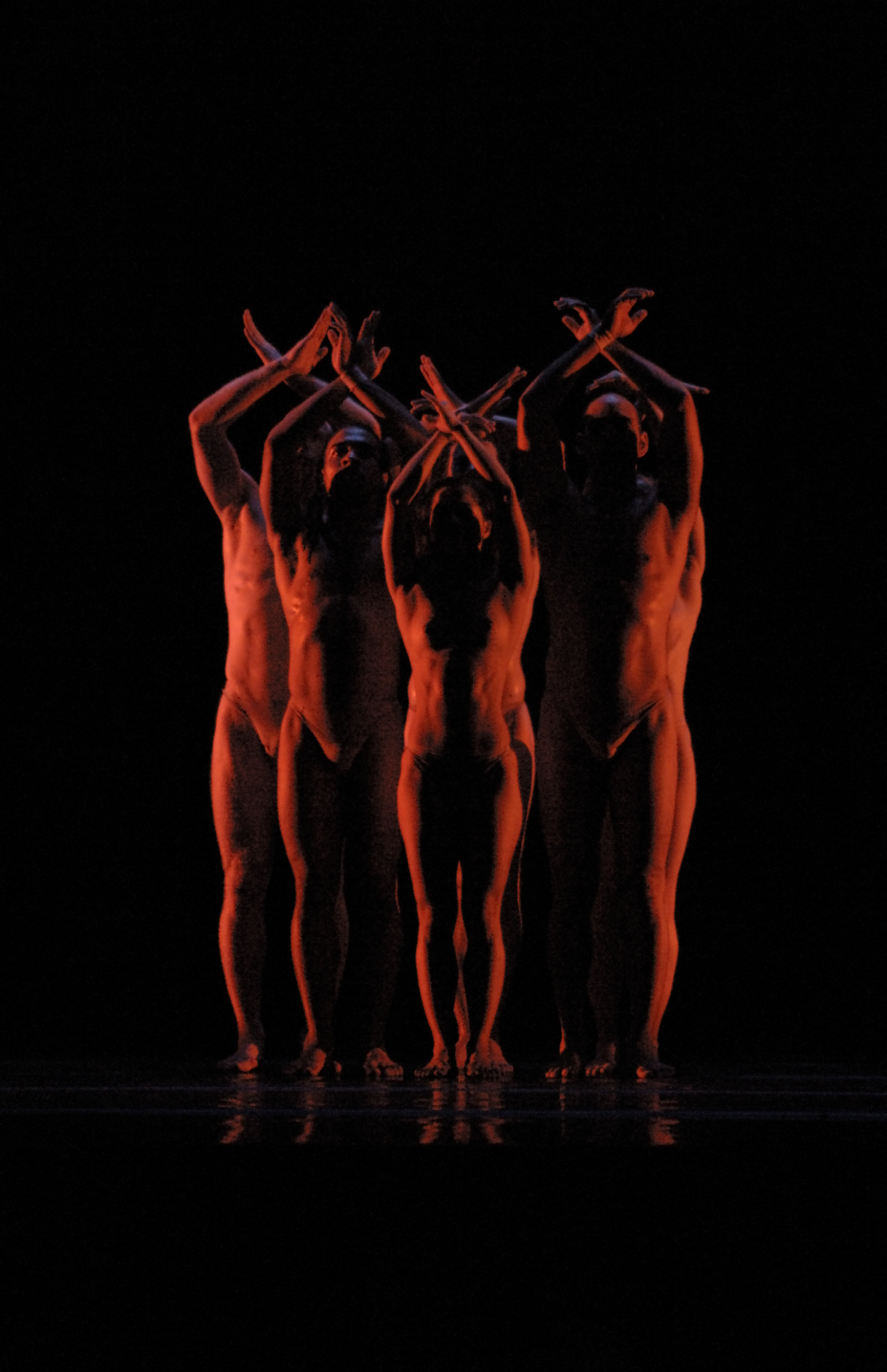 Hopefully you are about to travel somewhere soon where you will have the opportunity to see this program.  There are twenty more performances on the Pilobolus 2009 schedule so it could happen.  Even if you are not a dance fan, even if you are a ten year old boy who would say “yuck” to the idea of going to a dance program, Pilobolus is a must see .

Incredibly this almost 40-year-old company feels as fresh as when it debuted in the ’70s.  Their program of four pieces at the Ahmanson provided a mini-tour through their repertoire starting with Redline, — new for the 2009 season — and working back to a 1980 piece, Day Two.

But back to that ten year old boy.  Why would he want to come?  Whether it is the driving rhythm, the throat singing by Matt Kent, or the dramatic lighting by Neil Jampolis, Pilobolus is not your grandmother’s image of a dance company.  If what would draw you to dance, and would make him turn up his nose, are the lovely, ethereal ballerinas in Giselle or Swan Lake, Pilobolus is not a good bet.  But for the young, or young at heart, they are a gale of fresh air.

The troop (seven of whom performed in Los Angeles) is incredibly athletic, acrobatic, and their choreography is unbelievably complex.  The closest thing I can think of would be Cirque du Soliel.  But Cirque does not have the soul or finesse.  No matter what I try to write, nothing quite captures their impossible contortions, their sheer strength, their musicality, precision, and humor.  Pilobolus defies categorization.  by default it is classed as a dance company.  You will only pray that the ten year old does not try to duplicate their moves at home.  It is something that should only be done by professionals, and only these professionals are capable of doing it.  The dancers were so uniformly good it is impossible to single out a performance.

The current artistic directors, Robby Barnett, Michael Tracy, and Jonathon Wolken, say that every dance they have ever made has developed out of material arising from free play.  The sense of play and inventiveness is never far away.  Impossible lifts and leaps that rely on hours of precision practice appear to be spontaneous.  As if to illustrate play as the creative impetus, the curtain call was improvised on water slicked plastic sheeting.  The dancers shot out from the wings in various positions catching each other and splashing with a joy that could not be feigned.  It is a case of ‘you had to be there.’

The standing ovation is an overused cliché in Los Angeles, but it was thoroughly deserved at the end of this performance.  It was impossible to resist leaping to your feet and the creative curtain call kept the momentum going.  You do not have to be a ten year old to get your socks knocked off.  This is entertainment for all but the most traditional of balletomanes.