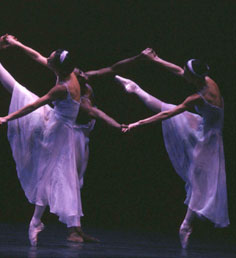 The San Francisco Ballet opened its 2003 season with a program that demonstrated its eclectic repertoire and the technical mastery of its dancers. Each of the three works presented embodied a distinct type of contemporary ballet: a neo-classical exercise in movement, a theatrical pastiche, and an emotional/psychological exploration. All displayed an emphasis on structure and the use of movement motifs.

Helgi Tomasson&#146;s Chi-Lin, which received its premiere last season, returned as the centerpiece of this program. Its pan-Asian character and focus on symbolism made it a particularly appropriate choice following the Chinese new year. It is one of Tomasson&#146;s most effective works&#151;a triumph that could have been a disaster. It is always risky for someone of one culture to try to assume the ways of another. He has borrowed from several cultures, notably Indian and Chinese, for Chi-Lin and made something his own.

The combination of Chinese composer Bright Sheng, costumer designer Sandra Woodall, who has shown her imagination with ethnic designs (Lambarena, for example), and lighting and projection designer Clifton Taylor, works to create an interesting stage picture.The music has a sound of its own that is indisputably Chinese.Violinist Roy Malan, who had two long, demanding solos (the central two movements of the four), was given a well deserved bow.

The sensational dragon dance that opened the ballet showed off the sculpted Sergio Torrado and his dragon headpiece, which he energetically threw around.Tomasson&#146;s movement used vigorous leaps and kicks, sometimes with the leg to the side (� la seconde) to create a dance that was always in flight. The dragon, symbolizing air, the tortoise (water), the phoenix (fire), and the unicorn (earth) are the main figures.Each gets a solo in which Tomasson capture&#146;s the creature&#146;s essential movement and gives each dancer an opportunity to display phrasing, line and control.

The rising Hansuke Yamamoto was an intense phoenix, precise in his dancing. Muriel Maffre took the Unicorn role, which was memorably created by Yuan Yuan Tan last season.Maffre, as always, rose to the occasion with her stretched lines (her penche in arabesque can go beyond 180 degrees) and her long dance phrases.She made the role her own, brining memories of her parts in Bugaku and as the Siren in Prodigal Son. She was partnered by Pierre-Fran�ois Vilanoba, who swam across the stage as the tortoise.After dances with billowing sleeves, dropping cloths, and flying banners, the stage erupted with fireworks for a brilliant finale.

Balanchine&#146;s Ballo della Regina opened the program. It is set to ballet music Verdi had to write to satisfy the demands of the Parisian public when his opera Don Carlo was done by the Opera.Balanchine&#146;s use of the music follows a classical model, with a central couple, four female demi-soloists, and a corps of twelve women. He uses signature movement motifs (wonderful hand gestures) and quirky changes of direction to set this ballet apart from its otherwise conventional origins.

The ballet was staged by Merrill Ashley, who originated the role.Her rapidly accurate dancing and brilliant intensity set a hard example to follow. Lorena Feijoo, who is also a fleet and precise dancer, danced the leading female to Zachary Hench&#146;s cavalier. She is a fiery dancer, but of the inward kind–she smolders. The ballet came across as pleasant rather than exciting.

Closing the program was James Kudelka&#146;s Dreams of Harmony, a large work in every sense.It requires a big cast.The music is Schumann&#146;s Second Symphony. Kudelka strives for a work of building power that seeks to overwhelm at the end.The subject is stated in the title&#151;he aims for universal harmony. He begins with a solo man and ends with a stage full of people. In between he favors the use of groups, especially trios. The second movement involves sets of trios who dance with linked arms, like daisy chain dances.

The third movement is built on couples, to the adagio of the symphony. The music is rich and emotional, and Kudelka builds the dance&#146;s intensity to match the music.He starts with a single couple, and then adds more gradually. He repeats this technique to build the final movement to the big ensemble that it is.