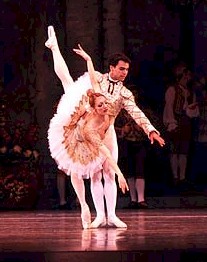 When the choreography to Don Quixote was cutting edge, in 1869, the French choreographer, Marius Petipa (Sleeping Beauty, Swan Lake) had recently come to St. Petersburg via Madrid, where he created his first bullfight ballet. At the heart of Don Quixote, a big, cliche-fest with bullfighters, gypsies, windmills, and the deranged anti-hero namesake, is a cross-pollination of ethnic styles, a marriage of ballet artifice with the earthier flavors of Spanish dance.

The San Francisco production, which premiered in 2003, has the additional cultural influence of staging by company director Helgi Tomasson, a Balanchine heir, and Yuri Possokhov, principal dancer in the company, who brings his Bolshoi pizzazz to choreographic endeavors. The final product, complete with the funny, waltz-laden score by Ludwig Minkus, issomething different–a mixed-breed story ballet that pulls out all the stops, lets the central couple live happily ever after, and uses the Don Quixote saga as an excuse to present crowded stages of villagers and dance after dance after dance.

The slightly loopy logic behind the old codger&#146;s travels works well in a full-length ballet, because it allows for scenes that don&#146;t necessarily fit into a strictly linear narrative. One moment, we&#146;re at the town square in Barcelona, the next moment dancing by firelight at a gypsy encampment, the next, in the middle of a dream filled with tutu-wearing ballerinas. Better to go with the flow and let the story wash over than to obsess about details. Who the heck is this Dulcinea, anyway? She may be important to the story, but she doesn&#146;t make it up on stage. Quixote and the clownish Sancho Panza seem primarily obsessed with Kitri, the starlet, whose tiny subplot was pulled from the Cervantes classic and given huge ballet treatment based on its subject matter&#151;true love. Kitri is a beautiful, headstrong female who runs away in order to be with her penniless (and very sexy) suitor, Basilio. Their flight roams all over the Spanish countryside, fleeing her father and the wealthy fop he demands she marry. The Don and his sidekick seem to be almost accidentally along for the ride. They serve as humorous connecting devices, dummies riding around stage on their (real) horse and ass. This is Kitri&#146;s ballet.

But then, as Balanchine put it, &#147;Ballet is woman,&#148; and Lorena Feijoo, the Kitri on opening night to Joan Boada&#146;s Basilio, was more than up to holding the stage, leaving Kirill Zaretskiy&#146;s Don Quixote to dodder in wonder as she took off in a whirlwind of love-frenzied pointe work, defiant dances with toreadors and a playfully wonderful way with her boyfriend that looked like a real young love. Feijoo’s every movement attacked with a prima&#146;s larger-than-life intensity. She went for broke on her solos and was often throwing-in extra pirouettes, making spectacularly deep backbends and muscling into leaps. Her Kitri was full of vim and willpower,a girl not about to let her father force her into anything, and her dancing had the same defiant edge, the kind of risk-taking approach that Balanchine used to foster in his leading ladies. If her head looked slightly askew on turns, it was all the more amazing that she could pull so many of them off. Her dancing was never effortless, it was headstrong, passionate. She danced like a man.

Boada&#146;s Cuban authenticity allowed him not only to play a lover with Latin verity, but when it was his turn to show-off, he was, after a slightly shaky first act, more than up to Feijoo&#146;s aggressive technical overdrive. Boada, rather compact for a leading man, was most successful as a playful young danseur. He had a lightness to his comic efforts that was refreshingly unforced. His faked suicide was one of the tighter stage moments, and made the galumphing Don Quixote, Pascal Molat&#146;s goofy Sancho Panza and Damian Smith&#146;s queeny suitor, Gamache, look silly. He has the Charlie Chaplin touch, a grace about comedy that he simply seems born with.And when his big moments came, in the famous wedding pas de deux,he was all over the flying tours, weightless jumps, trick pirouettes, pencil turns and knee-landing finales. He danced like he couldn&#146;t wait to get Kitri alone.

Don Quixote&#146;s Spanish roots gave nice dimension to the group dances. In the first act, the females were in characteristic heels and frilly dresses, and the toreadors worked their capes and bullfighter macho into choreography that included enough stamping and clapping to make a flamenco lover happy. The dream sequence, an excuse to fill the stage with tutus, had interesting spatial designs, as the corps of dryads was divided into subgroups, and a line of young cupids (students from the San Francisco Ballet School) broke up any Swan Lake-style massing of line and unison.

Sherri LeBlanc and Peter Brandenhoff, as a pair of gypsies who welcomed the gang of travelers into their camp, brought a welcome sensuality to the proceedings, a foreshadowing of adult appetites which couldn’t help but to inspire the younger Kitri and Basilio. The contrast from the sunny town square to a more intimate affair out on the plains at night also allowed for choreography that was more about soul and less about spectacle. It was as earthy and erotic as Petipa ever got, and LeBlanc, with her hair let loose, dancing in soft slippers rather than toe shoes, seemed like the second star of the evening. Her approach to the choreography had all the wisdom and contentment that Kitri could only hope to attain after a couple of babies. It may not have been a Balanchinian-ideal of woman, but it seemed more authentic and heartfelt, especially because of LeBlanc&#146;s ease with wildness.

The production was suitably filled with heat and texture and color; there were capes and knives and guitars for the men to dance with and fans galore for the women. Of the supporting cast, Elizabeth Miner, as Cupid in the dream scene, seemed particularly adept at her playful footwork. The chorus spent their many minutes of hanging around without too much distraction. Helgi Tomasson&#146;s New York City Ballet roots seemed to win over Possokhov&#146;s Bolshoi theatrics in this regard and things were kept mercifully minimalist for the corps.When the show got broad and goofy, all the business for the Don, his assistant, and the buffooning Gamache, one might have wished for a little less of the theatrics, but then, Don Quixote must have his due.