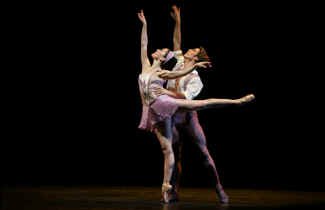 William Forsythe is an American ballet choreographer who has long ridden the cutting edge in exile, running Ballett Frankfurt for twenty years before the company was closed in 2004. In reality, the loss of state funding, all the dancers, studio space and opera house turf, is probably not a bad thing.

Every time an artist like Forsythe is told "no," the result is likely to be something brilliant. He has already created a smaller, private company, which will continue to perform in Germany and tour the world. His ability to work as a freelance choreographer will perhaps increase now as well. That would be a boon to groups like the San Francisco Ballet, which seems to come alive dancing his work.

The U.S. premiere of his ballet, "Artifact Suite," on March 30 in San Francisco, was actually an edited version of an evening-length 1984 work for Frankfurt, "Artifact". Even in bits and pieces, this work, from his first year in Frankfurt, looks like a calling card to greatness. It has theatricality, out-there dancing and a use of space that combines to push the limits of a form, albeit in a rather austere way. Even over twenty years old, "Artifact" feels shockingly new.

The monotony doesn&#146;t last for long, however. Early on, two solo couples careen wildly about, hinting at what is to come. There is the hyper-stretched Muriel Maffre, partnered by Pierre-Francois Vilanoba, and Lorena Feijoo, a little spitfire, looking evil or at least super-aggressive, dancing with Pascal Molat. The men here are fulcrums, barely showing, workmanlike to the women&#146;s flailing and diving. All the while, music, starting with an impassioned violin scratching out a Bach Partita, continues relentlessly. The sound doesn&#146;t even stop when the dancing is interrupted, several times, by the sudden, crashing descent of a fire curtain. It was ballet interruptus, but each time the curtain would rise again, the chorus would be in some new formation, creating a framework for the wild dervish-energy of the two couples.

Halfway through the piece, the music changes from violin to piano, a series of solo pieces by Eva Crossmann-Hecht ("Locamotiv," "Hypno Dance," "Dance of the Thousand Piques" and others). The choreography also evolves, as the chorus begins to break out of symmetry and individuals move into wild arrangements of threes and fours. Ultimately, the chorus resembles the world as it really is–not tamed and orderly, but crazy, out-of-control. Even pandemonium, however, in the hands of William Forsythe, has a design. The dance pushes dancers towards physical limits, but does so within a context of shared-weight partnered units, men and women working together. It is not the expression of a nihilist.

Also on the program was "Falling," a Stanton Welch ballet for ten choreographed for San Francisco a year ago, with "Rubies", the jazzy Balanchine ballet, part of a jewel series set to Stravinsky&#146;s "Capriccio for Piano and Orchestra." Watching "Rubies" in the company of a William Forsythe ballet offers a glimpse of genius as it has transformed itself through bodies and movement through the 20th century into the 21st.

Forsythe is all crazy, where Balanchine’s was an immigrant&#146;s New York, a world of jazz and possibility. "Falling" with interesting transitions, a certain quirky cuteness and great choreographic invention for five couples, did, as the choreographer stated his intentions in the program notes, seem to get to the essence of Mozart ("Salzburg Symphonies"), the musician and the man. On any other program, Welch&#146;s dance would have earned raves. Compared to Forsythe, however, the dance looked like something Mark Morris might think up on a bad day.