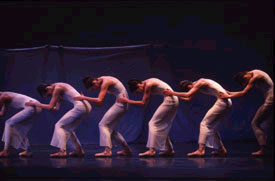 Go figure. A 30-year-old piece by Hans van Manen seemed more concerned with looking "modern" than a brand new work by Christopher Wheeldon, whose superior talent shines freshness into every piece he does with a Balanchinian singularity, a sterling voice. Within a modernish selection of repertory works that comprised the third program of San Francisco Ballet season, Gross Fugue, choreographed for the Nederlands Dans Theater in 1971 was presented to San Francisco audiences for the first time, in addition to the Wheeldon piece, Rush, created on the company for their tour to the Edinburgh Festival in 2003. Another recent success, Julia Adam&#146;s biology-ballet, imaginal disc, and a Pas de Deux to the piano music of Enrique Granados by Helgi Tomasson completed the program.

The van Manen piece did have that Nederlands Dans Theater rawness; the skin on display wasn&#146;t just for show. The whole piece had a sexual undercurrent, as the separated men and women never looked quite so robust as when they moved together. The music, Beethoven "Grosse Fuge, Op. 133, Cavatina" from String Quartet No. 13, offered typical Beethovian intensity and dynamic variation, but more rhythmic constancy than might be expected from the composer, leading into a visualization by van Manen that contained space-eating spatial patterns, Graham-style backfalls and floorwork, and a bit of over-the-top theatrics as the women literally hang from the straps of their partner&#146;s stripped-down-to briefs. Was the sexual revolution that long ago?

Wheeldon, choosing from a more straightforward lexicon, created in Rush, not the kind of energetic overdose the title would suggest, rather a rush of ideas, a web of complex patterns continually being etched by twos and threes. A piece with a central pas de deux, (supremely danced by Katita Waldo and Ruben Martin), four soloists and a corps of ten, the dance is darkness with fiery orange light splitting through, a festival of movement that takes Martinu&#146;s dramatic Sinfonietta La Jolla for chamber orchestra and piano and mines it for fuel. At the heart of Rush is the duet, one of the most successful single pieces of new choreography seen in this season or others in recent memory, communicating purity and emotional meaning through phrases that rewarded with pauses, moments of realization, shapes made with these bodies that rang out with clear intention. Rush is a more dancey, less austere work than Wheeldon&#146;s explorations into the atonal pieces of Ligeti. He honors the difference and explores a new musical terrain with respect and invention. And he&#146;s only 31.

Still, if anything lingers in the mind, besides the delicious Wheeldon pas de duex with great dancing by Waldo and Martin, it is the unique movement palette created by Julia Adam. Her piece was a sensation when it premiered last season, and looks, this year, as organic as earth. Costumes by Christine Darch, Benjamin Pierce, and lighting by Lisa J. Pinkham not only complement the choreography, but shape it. The stretch-fabric skirts on the females make total sense (the title refers to the bag of cells that lets a caterpillar morph into a butterfly) confining and focusing on their long, trapped limbs, the toe shoes wasted by the lack of free movement; they also fit the musical score, by Matthew Pierce, a dreamy blend of fiddle, brass and Hollywood film score sounds that would have looked all wrong in tulle. For all Adam&#146;s experiments with angular, choppy movements, it was Leslie Young, unable to hide her gorgeous classical lines at the heart of the pas de deux with Stephen Legate, that served as both betrayal to Adam&#146;s language, and allusion to the the butterflies&#146; inevitable transformation, short life of beauty and quick end.