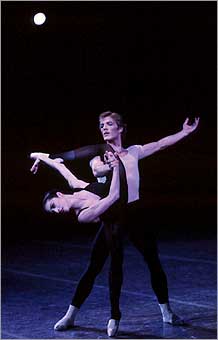 In the later period of his career, George Balanchine (1904-1983), didn&#146;t strike out in new directions as much as develop earlier themes in longer, more remarkable ways. These three major works [Square Dance (1957), Stravinsky Violin Concerto (1972) and Who Cares? (1970)] show a genius&#146; love of music, a puzzle-maker&#146;s delight in arranging dancing bodies, total design sense and a taste for the extreme.

San Francisco’s dancers were strikingly confident, visibly relaxed in this difficult dancing. Coached by Bart Cook, Maria Calegari and Sandra Jennings, Balanchine veterans-all, there was never a moment that the formations looked fuzzy, nor did the multitudinous steps ever begin to look like an overdose, rather than a feast. These are corps-heavy group pieces that require universal clarity and stamina, and the young multi-nationals that Helgi Tomasson has assembled in this company created an almost-breathtakingly nonchalant purity in unison. More than anything, dancing Balanchine requires faultless technique, and the company earns its international reputation partly with this attribute in mind. Depth of excellence defines itself in pieces like these, where the corps absolutely nailed the choreography, and made it their own.

Although considered one of Balanchine&#146;s "Americana" pieces, Square Dance has evolved over the years into a Vivaldi/Corelli dance, leaving the dancers to look Americana on their own. The red neckerchiefs, caller and on-stage "band" have been long-banned, and what is left is a speed-derby of beats and jumps accomplished by an ever-changing geometry of bodies, fourteen in all, dressed in pale blue and grey. The soloists, Vanessa Zahorian and Nicolas Blanc, may have humanized the piece in a couple of their interactions (Balanchine couldn&#146;t help himself), but footwork, speed and design were the main ingredients throughout and they were up front as the prime examples of this, whipping off their pirouettes, on display.

Stravinsky Violin Concerto was Balanchine&#146;s favorite ballet–at least he was known to have said that on several occasions. In this music, a blend of dissonance and orchestral lushness were combined by the composer so that Balanchine had the perfect platform for his stylist experiments. Four soloists and sixteen corps dancers celebrate the possibilities of jutting angles, asymmetrical spatial arrangements, all-out dancing and expression through pure technique. Balanchine may have selected the piece because the violin gets to sing, but his choreography is absolutely symphonic; it depicts the depths of the lower strings, the blare of the horns and the intricate lightness and unity possible in a huge assemblage of instruments.

There is a sense of play here, and sexiness that exists as an undercurrent. Two couples appeared at the center of things. Lorena Feijoo, looking reined-in, stylistically, but competent and clear, was paired with the romantic fireplug, Yuri Possokhov. But the real deal was offered-up by Julie Diana and Vadim Solomakha. Diana, a tiny thing, was absolutely elegant, and Solomakha demonstrated, in a solo turn, a rarity for a leading male, the ability to relax in simplicity, to turn down the dynamics for the right music, to soften.

Who Cares? was an appropriate finale, a pageant of Gerswin tunes, huge cast (24 dancers) and gaudy New York skyline as a backdrop, but the procession of dances by the neo-classical master looked just like Balanchine, lifted and linear, technical and classy, while the songs (without words here) seemed to call, from time to time, for a little more earth.