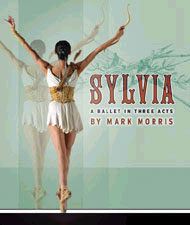 Just when you thought Mark Morris couldn&#146;t surprise you any more, he pulls another rabbit out of his choreographic hat. The famed dance-maker&#146;s gender-bending, riotous, icon breaking works of the past left audiences totally mystified about the highly touted Sylvia he was to set on the San Francisco Ballet. Would it be wacky? With all those dryads and Naiads and satyrs and nymphs, that wouldn&#146;t be hard to imagine. Would it be updated, mythical Arcadia transported to, say, Mill Valley? Not too much of a stretch if you remember The Hard Nut.

Morris&#146; great surprise in Sylvia is that he does none of the above. He plays it straight. With steps that seem to grow organically out of the notes of Leo Delibes relatively undistinguished score, he takes a 19th Century piece of fluff and turns it into something that is likely to remain in repertoire for many a year to come. Re-creating a classic with profound respect for the original concept and material is not such an unusual thing. We&#146;ve had Baryshnikov&#146;s Nutcracker, Helgi Tomasson&#146;s Giselle and many other re-workings of the old standbys over the years. But in the Morris canon it is something of a revelation.

Sylvia, first performed in Paris in 1876, has never been a hit on this side of the Atlantic. In fact, this is the first professional American performance of the work. With its convoluted plot of abducted maidens, endangered chastity, vengeful deities and faithfulness rewarded, it may have been at once too complicated and too simple-minded for a young nation bent on conquering the wilderness and building an economy. Maybe it&#146;s testimony to our maturity that Morris has made it so newly palatable. Or maybe it&#146;s just all that great dancing.

The plot is predictably silly. Sylvia, a chaste acolyte of the goddess Diana is beloved both by the shepherd Aminta (good guy) and the hunter Orion (bad guy). When Sylvia discovers Aminta spying on her, she shoots him with her little bow and arrow. In return, the god Eros (in charge of all things romantic) shoots her back and she is smitten with love for the slain mortal. In her grief, she is kidnapped by the rude Orion and dragged off to his lair. Meanwhile a sorcerer (really Eros in disguise) brings Aminta back to life. All this is played out against an impossibly artificial glade of woodland trees and flowers, presided over by the golden statue of Eros (from behind which the animate god pops out every now and then).

Act II contains a bit of Morris&#146; trademark humor as the rude Orion and his slaves court Sylvia in his den. Instead of submitting, she gets them all drunk and &#150; with the aid of the ever ready Eros of course &#150; makes her escape. Act III features a bacchanalian revel by the seashore, a mysterious pirate ship full of sexy harem girls and the reunion of the lovers, over the objections of the chaste Diana who, it turns out, has not always been such a paragon of virtue herself.

It’s dopey but fun and very much an ensemble work, despite virtuoso turns by the various principals. Sunday&#146;s cast featured the delectable Yuan Yuan Tan in the title role, with a graceful Gonzalo Garcia and the hunky Yuri Possokhov as her swains. Jaime Garcia Castilla was the omnipresent Eros, exhibiting some fancy footwork in his pirate and sorcerer guises, with Muriel Maffre at her regal best as Diana. The corps cavorted merrily, whether as peasants, demigods or undulating slave girls and the orchestra was ably conducted by Andrew Mogrelia. This may be the first time American audiences have seen this old chestnut but it probably won&#146;t be the last. Mark Morris and the San Francisco Ballet have roasted it into a delectable confection that audiences will reach for again and again.