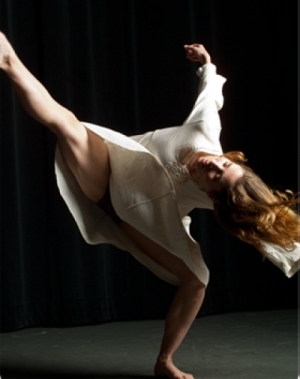 Scene from “Yes Is Not Passive”
Photo courtesy of Nugent Dance

Dance on the Fringe

The Tea Dancers/Ballet de la Compasión, many of whose dancers are of Latin-American descent, bring a fusion of movement, poetry and art to their work. Natta Haotzima, artistic director of the company, bases the show’s events on the poetry book “Un recuerdo del futuro” (A memory from the future). While Mayra Enriquez and Haotzima perform an aerial dance, Christopher Howard White executes a live painting and Gisela Perez Fernandez produces video projections. It is all wonderful, but a bit too much sensory overload. The program continues with additional events including a whirling number in serpentine dresses. What is necessary to bring this work to another level is better integration of the material and more skilled dance. Dan Wool, a San Francisco composer, added his scores.

Stamping Zebra Dance Theater enlisted a large group of singers and dancers to present “Selkie Tides,” an elaborate folk tale from the Scotland Hebrides. The complex legend concerning the transformation of seal creatures into humans (and back again) was portrayed in song by Mary McLaughlin and her chorus. The dancers, seventeen in all, included some in wheelchairs. Congratulations for this achievement goes to Sharon Took-Zozaya and her staff. The “selkie tribe,” dancers from Cabrillo College, were able to embody the seal creatures by their skilled phrases of floor movement.

The evening at 418 Front Street ended with Nugent Dancers’ “Yes Is Not Passive,” a creation by choreographer Stephanie Nugent. Her cast included Adam Wile, Megan McCarthy, Lynn Suemitsu, Jose Trujilllo and Ryan Jones Welsh, all very accomplished dancers. The text was by Olivia Sandoval with sound design by Ms. Nugent’s husband, Robin Cox. Although there were beautiful moments throughout the stories, a more thorough integration of ideas, words and movement, choreographically developed, would make this event effective and bring better impact to the intended ideas.

Sunday’s events began at Motion at the Mill studios with Flex Dance Company, a group of nine dancers devoted to “theatrical” release, contact improvisation moves performed to popular music.
The group is highly energetic, and their twelve numbers were much applauded by a large audience. This “old” reviewer would look for more variation in the movement material and some change of pace.

Flex was followed by a serious but funny event entitled “The Surveillance Solos,” performed and directed by Rebecca Alson-Milkman. In many ways, script, intention and execution, this was the most skilled of all the performances I saw, concentrating on the bizarre nature of government surveillance. It was done to scripts of actual biographical material, which implied criminal activity. The whole event, though delightful, needs to be pared down and tightened. It is an excellent attempt at presenting a current dilemma.

To end my stay at the Fringe Festival, I turned to a lively Mexican music group, Cascada de Flores, whose artists set their musical offerings in the context of an old-fashioned radio show. The trio features the hypnotic vocal duet of Arwen Lawrence de Castellanos and Sabra Weber, along with playful guitarist Jorge Liceaga, who together perform on a dizzying number of traditional instruments: tres cubano, flute, marimbol (a bass lamellaphone related to the African thumb piano), guitarra de son and jarana of Veracruz, donkey’s jaw bone, zapateado (percussive dance), and cajón. They gave a joyous finale to my Santa Cruz Fringe adventure.