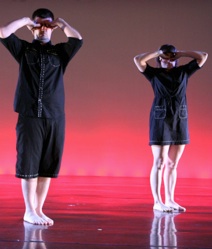 Of the three, Faulkner’s work is the most distinguished. “Sawtooth” performed by dancers Peiling Kao and Mo Miner to music by Eli Nelson, is an intriguing work, as Faulkner’s past choreography (award-winning “Until We Know for Sure”) has demonstrated. The two women, dressed elegantly with fur draped around the neck and shoulders, start the piece by pulling fibers from some animal like shape. The work proceeds toward a kind of evolution and includes duets of conflict, mimicry, and play. Faulkner is always able to produce inventive movement, exciting rhythms and dramatic interplay. “Sawtooth,” uses visual design inspired by Hiroshi Sugimoto’s images of dioramas at New York’s American Museum of National History and an additional set piece by Matthew Atacky, a mobile of glass bowls that seemed to be filled with water. That piece was not addressed. Faulkner has presented a captivating work-in-progress that will surely advance toward completion, bringing the dramatic implications to full realization.

About Amelia Reeber’s piece, “this is a forgery,” there is little that can be complimented, except the final moments when she brings on a figure dressed like herself, faced wrapped whom she leads across the stage as she herself disappears. The long moments preceding that ending seem to be an endless self-absorbed improvisation, repeated and unfulfilled movement motifs and general dynamic dullness. If this is, as she says, “authentic movement,” I would prefer that she design and shape gesture and dance structure. Reeber’s work included video projection, difficult to follow, and uninteresting to watch except for a very fine cat which appeared to break the monotony of “this is a forgery.” Perhaps we need the real thing.

Chris Yon and his partner/wife Taryn Griggs, in “The Very Unlikeliness (I’m going to KILL You),” have succeeded in producing a “ballet mechanique” in which the two work parallel in puppet-like movement for most of the work. You calls it an “act” in the style of old vaudeville, and indeed, it has much of the humor, drill-team precision and depersonalized routines. What they achieve is precision and imitative exactness that is to be applauded. What they don’t achieve is enough variation in dynamic and “punch” to keep us with them all the way. The lively music is a variety of hip-hop, jazz and electronic that does keeps the duo going even when they diverge. The sound design is by You, a multi-talented performer, as is Griggs.