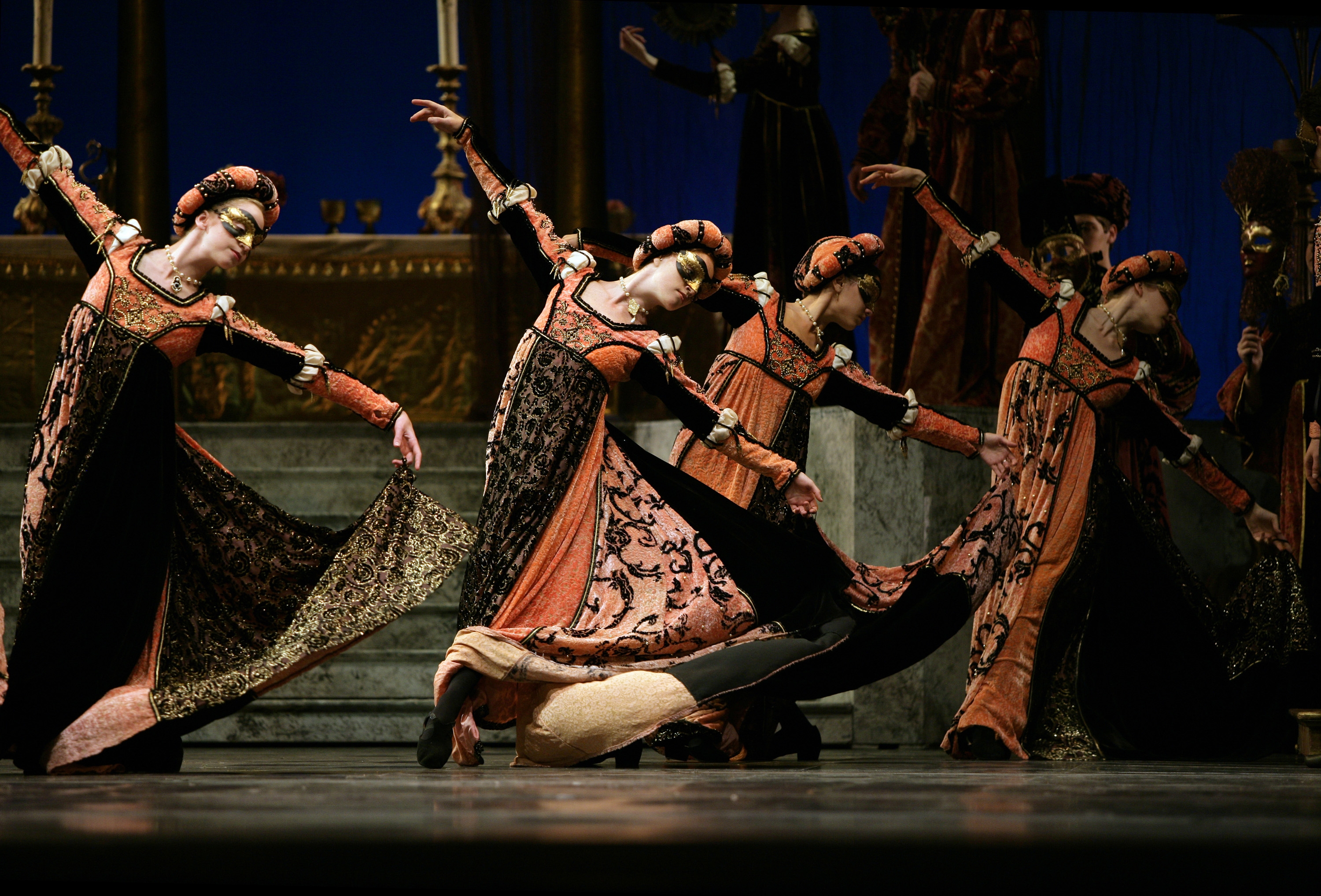 Two’s company in Helgi Tomasson’s 1994 version of Shakespeare’s immortal tale of “star-cross’d lovers.” The famed balcony scene is glorious, with fluid movement bathed in moonlight. Romeo and Juliet’s farewell, after their wedding night, as the lark heralds the morning of the bridegroom’s exile, is equally moving. Even the brief wedding scene is lovely and the final parting of the doomed lovers in the Capulet tomb can wring your heart out.

It’s those crowds that seem to be a problem. Except when they are fighting (and the dueling scenes are purely fabulous), Tomasson’s Capulets, Montagues and assorted townspeople might as well be dancing a Fokine divertissement in a Tchaikovsky ballet as roistering in the streets of Renaissance Verona. The mood is set in the strangely static opening. Townspeople mill about in the square but, to tell you the truth, there aren’t nearly enough of them and their milling is somewhat pedestrian (no pun intended). Later, in the same square, when Juliet’s nurse (Regina Bustillos at the May 2 performance) comes to find Romeo, it’s the same thing and again, after the wedding and before the fatal duel between Mercutio and Tybalt. Even a trio of acrobats (Sasha DeSola, Daniel Deivison and Garen Scribner) fails to liven things up a whole lot. Sure, Mercutio (James Sofranko) and Benvolio (Jaime Garcia Castilla) whoop it up with Charlene Cohen and Elizabeth Miner’s harlots, but even that becomes predictable the second time around. It’s only when the brawls begin that the stage comes to vivid life. To make matters worse, those crowd scenes go on too long and there are several of them.

Davit Karapetyan and Vanessa Zahorian are an appealing pair of teenaged lovers. You can sense both tentativeness and bravado in their faces and their steps. Zahorian, especially, rivets the eye when she is onstage – which is most of the time. Except in those fantastic fight scenes. Then it is the devil-may-care Mercutio (who has some of the best lines in the play, after all) and the haughty Tybalt of Anthony Spaulding who have our attention. Tomasson keeps some of the ambiguity in the plot and Sofiane Sylve’s distraught mourning over Tybalt’s body gently hints of a little incest in the Capulet household, as does her behavior in the Act I ball scene. It was a nice touch.

Not quite as deft was Tomasson’s capsule view of the events leading up to the tomb scene. Yes, we see Friar Laurence (a peculiarly inert Jorge Esquivel) hand a letter for Romeo to a messenger. And, in a foggy, crowded street we see him drop it, pick it up and run offstage. In the same brief scene we see Benvolio dash off, presumably to tell Romeo of Juliet’s death, but, unless you know the play, you wouldn’t get much from all this rushing around. And, how did Romeo happen to have a vial of poison in his doublet? Pretty handy since the “true apothecary” is totally missing. But, admittedly, these are quibbles. The piece is called “Romeo and Juliet” and when the title characters are onstage you don’t think of much but the tragedy of young love.