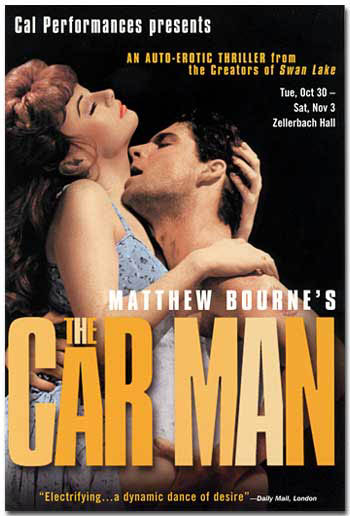 Fasten your seat belts! The Car Man just drove into town and it&#146;s going to be a bumpy ride.

Matthew Bourne, the British choreographer/director who set the dance world on its ear with his gender-bending Swan Lake a few years ago, has done an update on Bizet&#146;s opera about the seductive gypsy and her lovers. With a lot of humor and some film noir touches of The Postman Always Rings Twice it just might be better and certainly is more fun than the original.

Billed as an &#147;auto-erotic thriller,&#148; Bourne&#146;s The Car Man takes place in and around a garage in the fictional, vaguely Western, small town of Harmony, USA, population 375. That number will go down before the night is over. The curtain goes up and sparks fly &#150; literally. A bunch of rough-and-ready mechanics are working on a car. When they finish they will go upstairs and take a communal shower, accompanied by Bizet&#146;s famous &#147;Toreador Song.&#148; This is only the first of a host of musical jokes in a performance that can be as funny as it is moving, depending on where you are in the plot.

Next door a neon sign flashes, heralding &#147;Dino&#146;s Diner,&#148; owned by the self-important slob Dino (Neil Penlington) and his sexy but frustrated wife Lana (Saranne Curtin). A provocative Man Wanted sign hangs on a nearby telephone pole and, before long, the man shows up. He&#146;s a handsome drifter named Luca (Alan Vincent) and soon he has Dino and almost everybody else eating out of his hand. Luca is both the &#147;Car Man&#148; of the title and the &#147;Carmen&#148; of the plot. When he and Lana first set eyes on one another they freeze, as Bizet&#146;s melodramatic Fate theme rings out. Musical joke No. 2.

In another switch on the opera, Luca gives Lana a letter (instead of her tossing him a flower) and then dances an extremely sexy Habanera. Poor Lana is a goner. But don&#146;t get the idea that she is the wimpy and betrayed Don Jose of the opera. That role is assigned to Angelo (Will Kemp) who will take the rap after Luca kills the jealous diner owner. Luca&#146;s libido goes both ways you see and Lana is not his only sex partner. Angelo&#146;s in love with him too.

It sounds complicated but Bourne&#146;s choreography &#150; part ballet, part modern dance and a whole lot Broadway &#150; makes it clear as the glass through which we see the mechanics taking a shower, Lana and Luca making clandestine love or, later, Angelo waiting, gun in hand, for his revenge.

Long on foot stamping and slapping of thighs (and other body parts), Bourne&#146;s choreography is intensely physical and full of graphic sexuality. But it can be lyrically graceful as well. Examples are Angelo&#146;s tortured prison solo to the &#147;Flower Song&#148; from the opera or Angelo and Lana&#146;s pas de deux where each is lost in a private fantasy of the beloved Luca.The operatic role of Micaela, Don Jose&#146;s innocent and loyal fiancee, is assigned to Rita, Lana&#146;s sister, who is in love with Angelo. Heather Habens does some lovely work here, expressing her longing for the love she cannot have.

As steamy as things get in Act One, Bourne turns the heat up even higher after intermission. With Dino out of the way and Angelo in prison, Luca and Lana are living high off the hog, hanging out in a Beat nightclub (a very funny piece of performance art here). But Luca&#146;s love for the bottle and free-spending ways turn the romance sour. Justice finally is done but how and by whom is yet another surprise.

The music is adapted by Terry Davies from Rodion Shchedrin&#146;s symphonic adaptation of Bizet and the whole thing is directed by Bourne. The other members of Bourne&#146;s Adventures in Motion Pictures dance company, cops and convicts, mechanics and their girls, are as wonderful a group of dancers as the leads. A good thing too since the cast alternates in roles throughout the run. Lez Brotherston&#146;s stunning production design is an integral part of the show. The Car Man is a theatrical tour de force: fast, funny, physical, sexy and extremely violent. It&#146;s not for those who would rather ride the bus. And leave the kids at home.