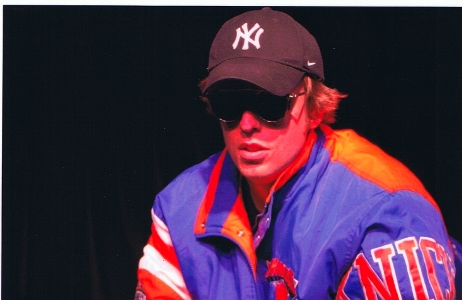 Theater buffs with the willingness to dabble in the experimental and untried now need not travel to Edinburgh, Scotland. Since 1947 the “fringe” has flourished there and many a new playwright and presentation have benefited from the exposure. Hollywood, home to many small and experimental theaters all year round, now has a festival of its own, the eponymous Hollywood Fringe. More than 200, self-produced presentations, 60 to 90 minutes apiece, are included, giving audiences a chance to experiment with the new at very reasonable prices. There is no guarantee, projects are often works in progress, but there is always the potential for discovery.

Ricky Butler’s solo production, “American Addict” was one work seen during press preview week. It will have five additional performances (June 16-18, 24, 25) during the festival. Writers usually start with what they know best, and Butler speaks from the heart about the grimy hurdles and pitfalls aspiring, talented, young writers and actors face in the hopes of making it. We all know the joke, “Oh, you’re an actor/writer/filmmaker. What restaurant do you work in?” Many of those hurdles, plus others like drugs and alcohol, are the same for many non-theatrical young people as well. Standing by, the mental-health professions are ready to hand out diagnosis that can turn problems into one-size-fits-all labels pigeonholing individuals in less-than-useful ways. Butler is a thoughtful young man with a provocative gift of observation and insight. He delivers humor with his pain and gives realistic reason for hope.

The Fringe festival is a place for experimentation. In a one-hour piece such as Butler’s, you have the opportunity to see a promising but still developing talent. His writing skill is apparent; in fact, I suspect that reading the script as a short story it would have even more impact. A solo stage work with six characters is harder to pull off. The handsome Butler nails the self-serving psychiatrist and the struggling young patient. Some of the others were more elusive to him as an actor.

But give this fringe festival a chance. What do you have to lose?