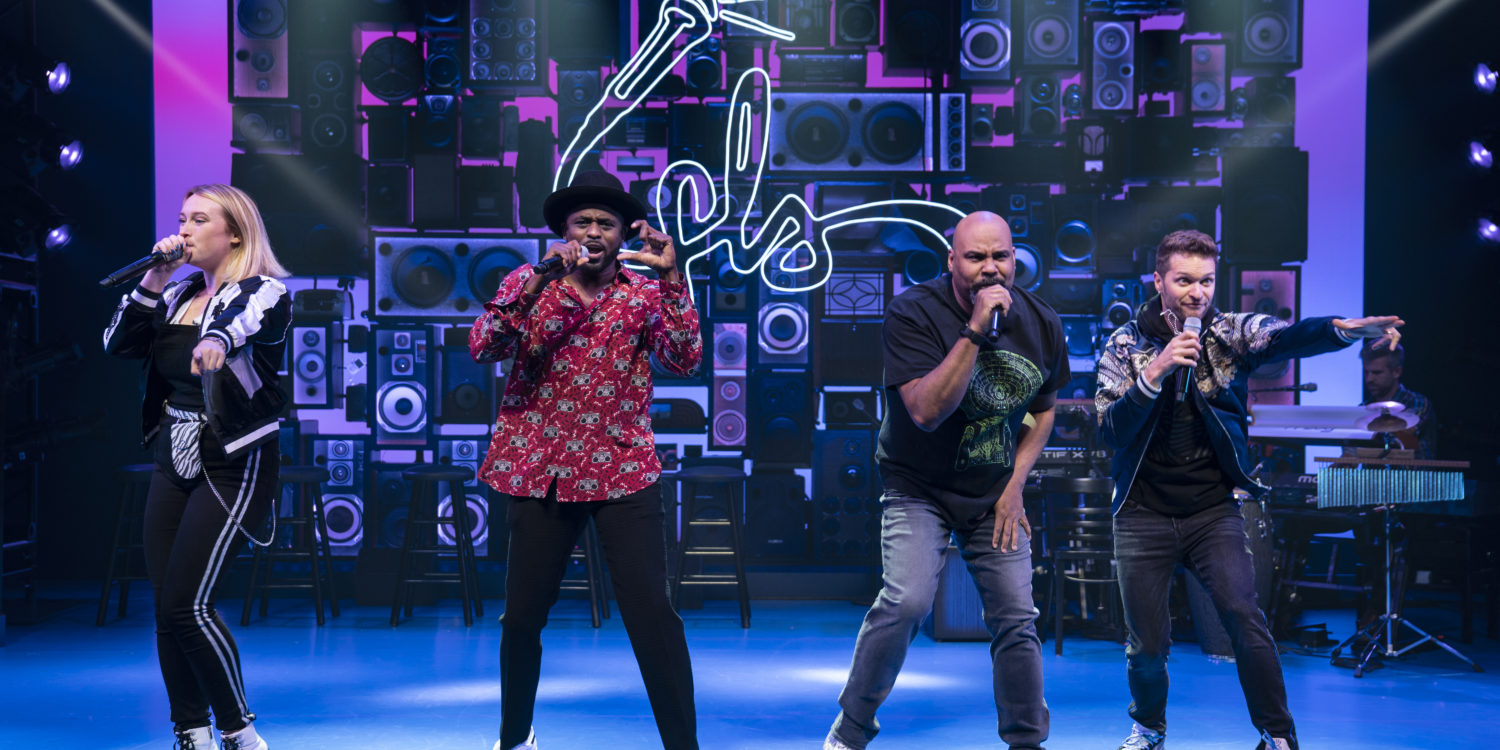 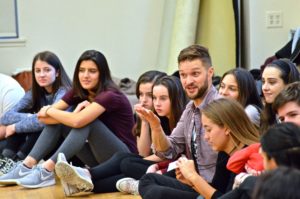 The delightful improv show “Freestyle Love Supreme,” recipient of a 2020 Special Tony Award®, is back on Broadway, just in time to lift us out of our post-pandemic blues. The show, conceived by Anthony Veneziale and created by Lin-Manuel Miranda, Thomas Kail, and Anthony Veneziale, features hip-hop, comedy, vocal stylings, and music – all performed from cues provided by the audience. The result is unpredictable, raucous, and wildly entertaining.

“FLS” was a sold-out hit when it played in downtown NYC before moving to Broadway right before the Covid-19 shutdown. It’s now reopened for a limited engagement with a core cast of performers that includes Andrew Bancroft, Tarik Davis,  Aneesa Folds, Arthur Lewis, Kaila Mullady, Chris Sullivan, and Anthony Veneziale.

Other company members who pop into any given show include Miranda, Christopher Jackson, Daveed Diggs, James Monroe Iglehart, Wayne Brady, Ashley Pérez Flanagan, Bill Sherman, Utkarsh Ambudkar and others. In addition, on any given night, a special guest may join the company. Recent surprise cameos have included performers Josh Groban, Solea Pfeiffer, and Jessica Vosk, as well as composer Joe Iconis.

We spoke with cast member Andrew Bancroft (AKA Jelly Donut), about being back in the show, the FSL Academy, and what it means to be part of the Broadway community right now.

Congratulations on the success of “Freestyle Love Supreme”! It’s such a thrilling and joyful show. When did you start performing – was that something you went to school for or did you find it through another path?

Thank you! We’re having a blast up there. I’ve always had a little performer madness driving me to make things, although without much formal training. I taught myself guitar to play in rock bands in high school and college, created bizarre cabaret shows like “Late Night with God” in San Francisco, and entered rap battles in Oakland. Not everything I’ve created or performed in have been successful or lucrative (very few in fact!), but the act of creating is just something I need to do it. I think we all do in some way.

What attracted you to rap, and specifically, freestyle?

I grew up listening to cassette tapes so many times the tape ribbons would eventually spool out of the casing. I had Young MC, Fresh Prince, NWA. Rhyming was fascinating to me, so rap was the natural progression from Dr. Seuss. My buddy Jeff introduced me to freestyling in ’96. He played an instrumental tape and we rapped about everything in his room. I was hooked from that point. Being in the moment like that over a beat was the most fun game I’d ever played.

How did you become involved with “Freestyle Love Supreme”?

I had been making silly rap videos and entering rap battles in ridiculous costumes at Oakland’s “Tourettes Without Regrets” when I reconnected with Anthony “Two-Touch” Veneziale, who started “FLS” with Lin-Manuel Miranda and Tommy Kail. Two-Touch and I knew each other from Wesleyan and started freestyling together the instant we reconnected. We started The Freeze – a west coast sister to “FLS,” where we played with MCs like Daveed Diggs and James Iglehart.

Tell us about the Freestyle Academy – how did that come about? Who are the students?

“Freestyle Love Supreme” is such a gift to those of us in the group, not only because we love to perform but also because the community and skills help us live more grounded, empowered lives. Shockwave (Chris Sullivan), Two-Touch, and I hypothesized that opening this community up to everyone could have a profound impact on many lives. So far, so good! Participants are having a blast learning to freestyle and improv, but the biggest takeaway is how they support each other and lift each other up. Our students are from all over the world. We’ve taught rabbis, supreme court lawyers, brain scientists, and battle rappers. We also have a large scholarship contingent because it is imperative to keep the Academy a welcoming, inclusive space regardless of a participant’s financial status.

How did the Academy adapt to the pandemic and what has been the result – were you able to serve more students digitally?

We shifted from in-person classes in NYC to all digital classes, which meant that students were joining from the UK, India, Peru, Australia, and more. The Academy also became a lifeline of community during a time when so many of us were feeling isolated and powerless. We hope to start in-person classes up again in 2022 as well, but our digital classes are here to stay!

Has the show changed at all because of the pandemic?

Our audiences are ON FIRE. They always were, but now there’s an extra buzz in the air- a hunger for connection and an appreciation to celebrate together. Audiences are masked and vaxed and more hyped than ever.

Broadway performers warm up their voices and bodies, but with a show that requires such brainpower like this, is there anything special that you do to get ready?

I do tongue twisters and rap on my own- in the shower, on the train… everywhere. But the best warm-up is freestyling with members of the crew. Kaila Mullady, Aneesa Folds, and I have a little warm-up circle we call “Kid’s Table.” We play a loud beat and trade bars trying to shock each other and make everyone laugh. It’s the best.

What’s it like to be part of the Broadway community at this time?

No one is taking Broadway for granted right now. The audiences, the crews, the performers- it feels like everyone is grateful to be a part of this, and that we’re all working together to keep each other safe and inspired. It may sound cheesy, but it’s like we’re all part of one big, beautiful show called “Humanity, the Musical.” I’m incredibly thankful to have a little role.

ANDREW BANCROFT is a writer and performer in New York. He made his Broadway debut with “Freestyle Love Supreme” in 2019. Bancroft is a co-founder of FLS Academy and a member of the band Moondrunk. As rapper Jelly Donut, he has been featured in MTV’s “TRL,” Rolling Stone and Time. Bancroft writes musicals and is an award-winning ad writer/creative director.

“Freestyle Love Supreme” plays at the Booth Theatre through January 2, 2022 before embarking on a national tour. Tickets and information at Telecharge.com.

Inset: Andrew Bancroft with students from the FLS Academy.