Top Ten lists are obviously subjective…so what makes a movie Best of 2015 material? For me, it’s usually about some combination of the following: originality, degree of difficulty, consistency of execution, and indelibility. Is it a film I keep thinking about? Did it earn its emotional moments fair and square? Was it “about” more than just “what happened” on screen? And did it show me something I’d never quite seen before, even if it was a sequel, adaptation, etc.? In a fairly weak cinematic year, here are the titles that fired on all cylinders for me while ticking off some or all of the above.

Sorry, “Star Wars”, but here’s the science fiction reboot that really dropped my jaw this year…an especially impressive accomplishment considering Tom Hardy is actually a relative dud as the alleged lead character. And yet, his eponymous wasteland warrior was only one small, glowering piece of a much larger, louder picture as director George Miller crammed nearly every frame of his truly fast and furious fable with inventive, astonishing, (and, for the most part, non-CGI) action. Like a tank full of nitrous, Miller’s fully-realized world of War Boys, polecats, and fire-spewing heavy metal left me cackling with glee half the time, while the white hot rage of Charlize Theron’s performance as Imperator Furiosa grounded all the foolishness with the grimly topical, pre-apocalyptic question: “Who killed the world?” 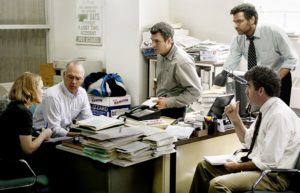 Old school Hollywood filmmaking doesn’t get any better than writer/director Tom McCarthy’s salute to the seemingly outdated concept of competent journalism. A Boston film that nails the feel of actually living here (by, for instance, not cramming thick Southie or Kennedy accents into the mouths of every single character), “Spotlight” chronicles the step-by-step, piece-by-piece, interview-by-interview process that enabled a crack “Globe” investigative unit to uncover the Catholic Church’s institutional complicity in a mind-bogglingly evil international child molestation scandal. Everyone in the cast is top-notch, from Michael Keaton’s dogged reporter to Michael Cyril Creighton as a heartbreakingly sweet abuse victim — but the best part of the movie is the way that it makes the Spotlight team’s dawning awareness of the scope of the (by now familiar) conspiracy as fresh and shocking as a horror movie. 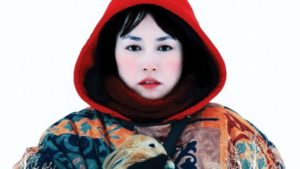 Austin filmmakers David and Nathan Zellner have been cranking out offbeat indie gems since their wildly inventive debut, “Plastic Utopia”, but “Kumiko” is by far the most precious jewel of their careers to date. Loosely based on a true-ish story, the stylish, hypnotic film chronicles the journey of an eccentric young Japanese woman (Rinko Kikuchi) so desperate to escape her dead-end life in Tokyo that she sets off on a hopeless quest to find the lost treasure buried in the snow at the end of another cinematic “true” story, “Fargo”. A bittersweet meditation on the power (and limits) of fantasy to help us get through our lives, the movie scores bonus points for the saddest farewell to a beloved pet since “Old Yeller”. 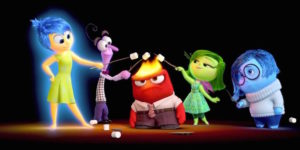 Pixar provided another of 2015’s biggest lump-in-the-throat moments (Je suis, Bing Bong!) as well as some of the year’s greatest belly laughs in this brilliant depiction of a pre-teen’s farewell to childhood after she moves from her familiar Minnesota comfort zone into a fish-out-of-water new life in San Francisco. Basically a family-friendly version of the best sequence in Woody Allen’s “Everything You Always Wanted to Know About Sex* (But Were Afraid to Ask)”, writer/director Pete Docter’s premise is both clever and profound, with human (and animal) consciousness literalized into self-contained ecosystems, where constant Joy, Fear, or Disgust are simply impossible and Sadness is sometimes the only way to stay sane. 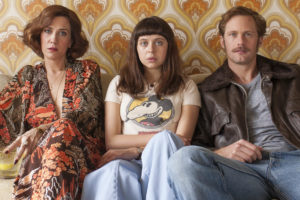 Writer/director Marielle Heller’s film (based on a graphic novel by Phoebe Gloeckner) is a far more adult (and sometimes uncomfortably explicit) coming-of-age tale as another young woman in San Francisco (this time the 1970s version) awkwardly grapples with her loss of innocence, in all senses of the term. Relative newcomer Bel Powley gives one of the best performances of the year as budding cartoonist Minnie Goetze, who fantasizes in comic book doodles (including imaginary conversations with her sardonic fairy godmother, editor/artist Aline Kominsky, a.k.a. Mrs. Robert Crumb) while screwing around with the dopey, sexy boyfriend (Alexander Skarsgård) of her clueless, overly permissive mother (Kristin Wiig). Idiosyncratic and emotionally truthful, it’s an era-specific “Diary” that’s deeply personal yet also fairly relatable, no matter your gender. 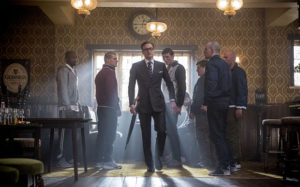 A giddy throwback to the days when spy movies were more concerned with gadget-y fun than the alleged “angst” of their cartoonish protagonists (hi, “Spectre”!), Matthew Vaughn’s class-conscious adaptation of the comic by Dave Gibbons and Mark Millar is a non-stop thrill ride of smartly ridiculous plotting and stylish ultra-violence (like the highly satisfying guilty pleasure annihilation of a redneck hate group congregation by Colin Firth’s Bonder than Bond double-secret British agent Galahad). 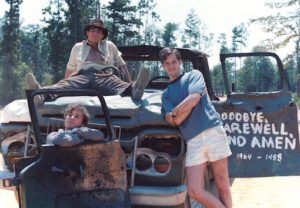 This documentary about an improbable shot-for-shot remake of “Raiders of the Lost Ark, “created by a trio of Mississippi school chums over the course of six years in the 1980s, works as both a tribute to the ingenuity of low-budget filmmaking and a paean to the golden era before helicopter parenting, when barely supervised kids had the freedom to set themselves on fire and shoot bottle rockets at each other for the sake of more realistic depictions of barroom brawls and supernatural shenanigans. But “Raiders!” also tackles the darker side of the creative impulse as documentarians Jeremy Coon and Tim Skousen track the tattered show biz dreams of their subjects in adult life as they reunite during a (possibly foolhardy) attempt to complete the one sequence from their labor of love that they were never able to complete: an extremely dangerous fight scene involving an airplane, whirling propellers, multiple explosions, and likely financial ruin. 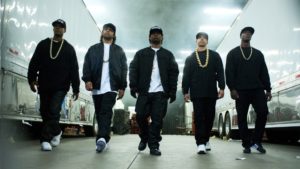 F. Gary Gray’s chronicle of the rise and fall of rap supergroup N.W.A. escapes the overly formulaic, underdramatized straightjacket of most music biopics (if not the standard nagging questions of authenticity) thanks to the Scorsese-esque cinematic scope and energy of his tale and the lived-in, charismatic performances of a strong ensemble (particularly Jason Mitchell as the late Eazy-E and O’Shea Jackson, channeling his father as Ice Cube). Plus, in the wake of ongoing 2015 protests over the deaths of numerous unarmed black men, women, and children from Eric Garner and Tamir Rice to Freddie Grey and Sandra Bland, it’s hard not to feel the visceral force of anger powering the film’s re-creation of a forbidden 1989 performance of “Fuck tha Police” (a scene which sadly doesn’t seem the least bit dated). 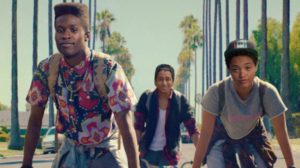 Rick Famuyiwa’s equally timely yet far more cheery comic thriller plays like an urban black update of 1983’s suburban white teen caper “Risky Business” as a ’90s-obsessed South Central senior (Shameik Moore) stumbles into shady circumstances en route to an Ivy League education. Of course, the big difference between the two films is that Tom Cruise’s character uses his upper class privilege to hide his North Shore brothel in plain sight, whereas “Dope”‘s protagonist is both fearful and exasperated about getting sucked into a “gangsta” stereotype he’s spent his entire life dodging, thus raising the stakes sky-high as he and his geeky friends scramble to avoid becoming statistics in a world they never made. 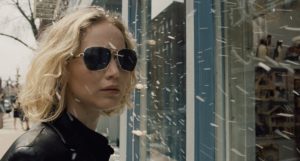 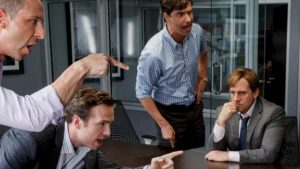 Sure, a tie for #10 is a bit of a cheat, but these two fizzy, late-season cautionary tales about the corruption of capitalism could practically play as one movie, separated by an intermission like a business world version of “The Hateful Eight”. In “Joy”, Jennifer Lawrence is a smart, talented woman who can’t catch a break in the current economic climate, then finally comes up with a great idea and a business plan and works really hard…and “still” gets stomped by strangers and “loved ones” alike, all obsessed with money “uber alles”. “The Big Short” takes the theme even further, showing the international consequences of unchecked greed, where a few people get rich, most people get screwed, and nobody ever emerges unscathed. Fortunately, both films also feature enough fast-paced gallows humor to make them palatable, with “Joy” promoting the virtues of angry determination, while “The Big Short”‘s bemused rage at a system more horrifically broken than even its most cynical characters initially realize is bracing and cathartic (even if we seemingly can’t do a goddamn thing about it).

Memorable Moments/Performances of 2015: Annabelle Dexter-Jones & Jordan Lane Price, whose characters both deserved a slightly better film than “The Nymphets”, Paul Dano in “Love and Mercy” (especially the studio scenes), LeBron James in “Trainwreck”, Gore Vidal goading William Buckley into losing his shit in “Best of Enemies”, the nostalgic rush of seeing the Sunset Boulevard Tower Records again in “All Things Must Pass”, the cameos by Ms. Amar and me in “The Damned: Don’t You Wish We Were Dead?”, every Bunzo scene in “Kumiko the Treasure Hunter”, David Sedaris saying, “I don’t think I sound like a woman, I think I sound like a very small man” in “Do I Sound Gay?”, Charlize Theron, Nicholas Hoult and the Doof Warrior in “Fury Road”, the final dinosaur fight in “Jurassic World”, “Inside Out”‘s glimpse of the cat mind, Tony Bennett being the world’s nicest man in “Amy”, Jason Segal’s final dance in “The End of the Tour”, the Lily Tomlin &amp; Sam Elliot scenes in “Grandma”, Greta Gerwig in “Mistress America”, every Benicio del Toro moment in “Sicario” (especially the dinner table scene), “Spectre”‘s Day of the Dead opening, literally everyone in “Spotlight”, Jennifer Jason Leigh in “The Hateful Eight”, Isabella Rossellini and Melissa Richards in “Joy”, Steve Carell’s anger in “The Big Short”.

Most Disappointing: roughly the second half of “STAR WARS: THE FORCE AWAKENS”

Pretty much everything great about “The Force Awakens” is just a clever riff on what’s come before (a cuter robot than R2D2! good guys flying TIE Fighters! a female Luke Skywalker! wreckage of vehicles from earlier movies!) — and what’s bad soured my enjoyment of the whole: lazy plot holes, unnecessarily self-aggrandizing mythology, unmotivated (and also highly unconvincing, petulant and boring) villainy, and a particularly unearned, barely set up “dramatic” moment that provoked eye rolling rather than misting. Even fans of the J.J. Abrams reboot tend to say, “Well, it was “good enough”…” which seems like a pretty low bar for a movie that’s already earned billions of dollars worldwide. For all the recent (and mostly well-deserved) bashing of the prequels, I actually far preferred “Episode 3: Revenge of the Sith”, which at least had some original ideas and (what with its implicit 2005 criticism of leaders launching fake wars for personal gain) actually had something on its mind beyond ticket sales and marketing opportunities.

Most Overrated: “TRAINWRECK”
Fine, yes, it was “almost” as funny and well-constructed as, say, “Forgetting Sarah Marshall”…and yes, Amy Schumer’s had some funny skits on her TV show. But for the amount of press and adulation she and her movie received over the past year, you’d think Schumer was the feminist/comic icon child of Gloria Steinem and Charlie Chaplin. By this point, even Lena Dunham must be thinking, “Jeez, Amy…how can we miss you if you won’t go away?”