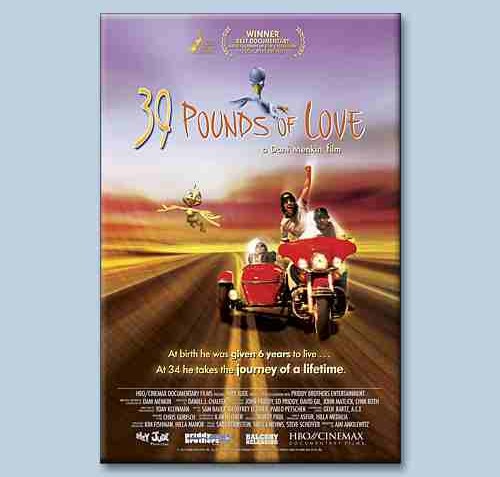 Born in Texas, thirty-four year-old Ami Ankilewitz was was diagnosed as an infant with a rare form of muscular dystrophy and given six years to live. Now living with his mother and surrounded by a circle of loving friends, Ami works as a 3-D animator in Tel Aviv. Motivated by the heartache of an unrequited love, Ami sets out to fulfill his life&#146;s dreams &#150; to find Dr. Cordovan (the doctor who gave him the original prognosis), reunite with his estranged brother Oscar in Texas, see America with his friends and ride a Harley-Davidson. The result is a mostly heart-warming, affectionate, and technically interesting documentary as road movie.

Ami&#146;s disorder is a rare motor neuron disease known as spinal muscular atrophy (SMA), and it affects the voluntary muscles. The disease especially affects the proximal muscles (shoulders, hips, and back), and in Ami&#146;s case, he has been left with the ability to move the finger on one hand only. The body retains its ability to feel sensations and the brain is not affected. Like many afflicted with CMA, Ami is very bright and unusually sociable. Indeed, much of the film is a testament, in director Menkin&#146;s words, to Ami the "veritable friend magnet." Reflecting the increasing (if still reluctant) degree of social acceptance of the disabled (in Israel and the US), Ami is able to blossom in most ways as a complete, "regular" person &#150; a far cry indeed from cinematic antecedents such as Jeffrey Merrick (The Elephant Man) or the cantankerous quadriplegic Christy Brown (portrayed by Daniel Day Lewis in My Left Foot)

39 Pounds of Love is frankly autobiographical and employs a technically interesting and narratively useful tack of intersplicing Ami&#146;s computer animation (a boy blue bird who woos a yellow Tweedy-Pie-like girl bird) with home movies and documentary footage. This permits an emotional and visual ventriloquism, expressing what Ami desires romantically. He has fallen in love, in a classic patient-nurse bond, with his most recent caretaker, Christina. After two years of being lovingly cared for, and becoming acutely aware of her inability to respond to him in a romantic (but only implicitly sexual) manner, he sends her away. Much of the road trip across America, and Ami&#146;s private story, involves his attempt to work through letting go of her. When asked on camera when did he finally realize he is different, Ami replies, "when Christina left."

The film takes as a given the loving and supportive circle of family and friends Ami has surrounded himself with. The quest that takes him on the road deals with bringing emotional completion &#150; with the doctor whose diagnosis would have condemned him to an early death and with his brother Oscar in Dallas. Early on his journey, when arriving at the Grand Canyon, Ami experiences a sudden bout of physical ill health. Park rangers are summoned, an ambulance is suggested, but Ami refuses all, including his best friend Asaf&#146;s pleas, to give up the trip. (Everyone else is very tired.) Ami seems to be very much The Poster Boy for himself, but not for the severely disabled in general, even though this will easily, if erroneously, be read into the film. Indeed, that is the one disquieting undercurrent of this documentary.

The man is truly remarkable for his ability to cope and thrive, and not to have descended into an adulthood of anger and resentment. The problem is that victories in the fight for dignity and equal treatment for the disabled so often turn on this personal likeability factor. Physical disability usually extorts an additional price &#150; the battle up from despair and isolating difference. Ami&#146;s gift is not only his undefeatable spirit, but his amiability, even his ability to charm all comers to give him what he wants (except, of course, Christina). It is a rare genius who can transform personal adversity to such an inspiring message.