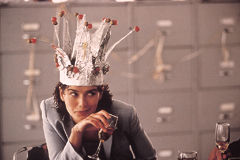 Aberdeen is the third film for Norwegian writer/director Hans Petter Moland and the first since his 1995 Zero Kelvin. The latter had three trappers isolated in a cabin in the frozen tundra of Greenland. Aberdeen has a father-daughter team isolated in substance abuse and family dysfunction. Both films offer the major plus of Stellan Skarsgard, the Swedish actor whose portrayal of an oil rigger in Breaking the Waves was the perfect compliment to the profoundly disturbing performance by Emily Watson as his wife.

In Aberdeen, Skarsgard is cast once again as an oil rigger, Tomas. He’s become a falling-down drunk, living in Oslo. Years before, he had a daughter, Kaisa (Lena Headey), with his lover, Helen (Charlotte Rampling). He and Helen split and Helen tried raising Kaisa, but then sent her to live with her father. Now Kaisa is a successful career woman in London and Helen lives in Aberdeen–each of them all too happy to keep their distance from the others.

What triggers the action is Helen’s ill health; she is dying of cancer and wants to mend fences before she dies. She asks Kaisa to bring Tomas to see her in Aberdeen. Kaisa flies off to Oslo to collect her father and they set off on a troubled and troubling trip to Aberdeen, extended beyond the length of a short flight by the airline’s refusal to accommodate a passenger who’s drunk even before boarding. The alternative is driving, which extends the trip into the required length to qualify the film as a genuine road movie.

The concept is a promising one, and some of that promise is fulfilled. Father and daughter begin in a state of mutual belligerency, go through a series of experiences together, airing their grievances over time, getting to know one another again, learning to trust. Their historical pattern of raised expectations and dashed hopes seems to be repeating, though they both yearn for connection. The drunk turns out to have some principles; the successful career woman turns out to snort her share of cocaine and carry her own emotional baggage.

But too many questions are left unanswered in the characterizations and in the writing. Was it the failure of his relationship with Helen that drove Tomas to the bottle? The uprooted life of the oil rigger? And why did he lose his job? He says, "I’m outdated. It’s unfashionable to have a mind of your own." But Moland doesn’t back up that line–what had Tomas said or done that was so independent that it knocked him into the gutter?

Kaisa is somewhat better realized; her family history of being tossed from one parent to the other and then having her father away on the rigs half the time goes far to explain her instabilities. Both roles are fleshed out by sensitive and skilled performances, but the acting alone can’t fill the motivational gaps. And a late-in-the-game plot twist thrown in with revelations, counter-revelations, and a reversal, while making a point, seems forced and artificial.

Ian Hart is sympathetic as a truck driver who comes to their aid. Charlotte Rampling has disappointingly little to do.There are glimpses of reindeer, oil rigs, and wintry landscapes along the way, but mostly the sense of physical place is the road itself which could be almost anywhere. The real place in this Aberdeen is the inner place of disappointments, emotional neediness and, ultimately, reconciliation.