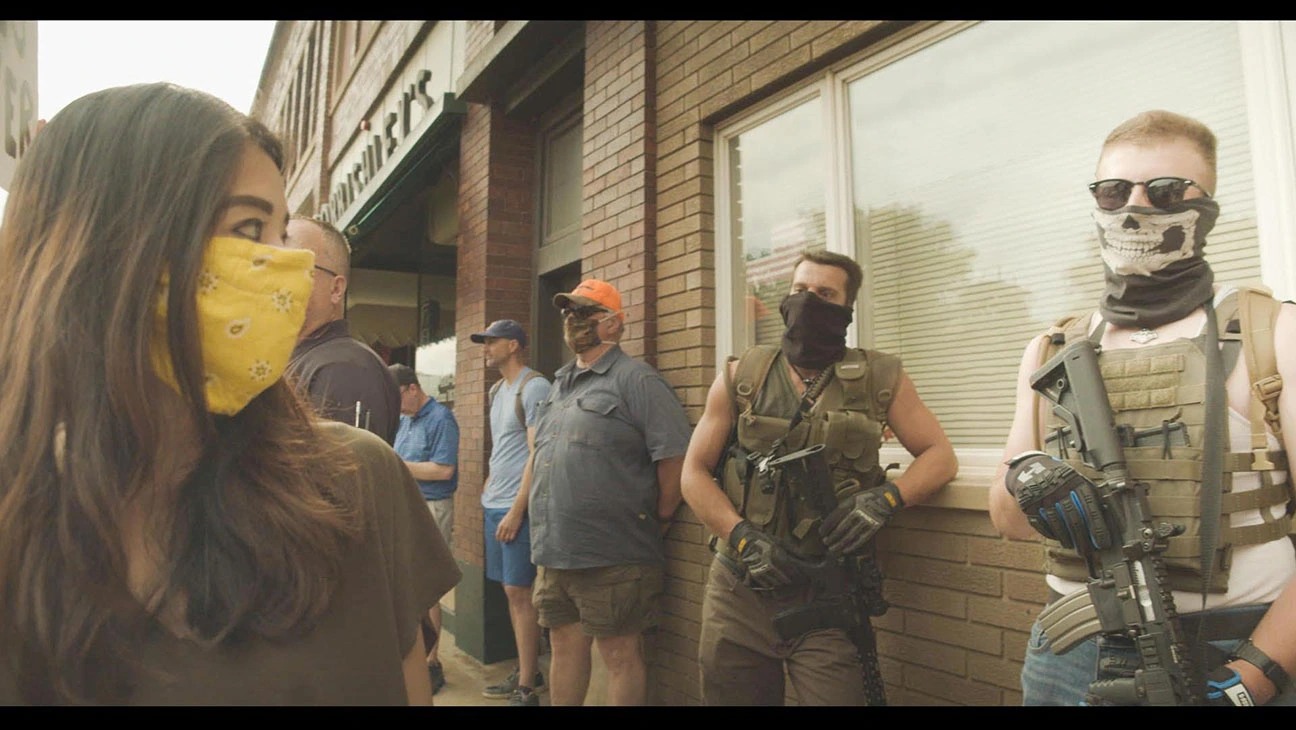 As of this writing, David Siev’s compelling film about his own Cambodian American parents struggling to keep their restaurant afloat amidst the twin plagues of the coronavirus and emboldened MAGA racism has been short-listed by the Academy of Motion Picture Arts and Sciences as a potential Best Documentary nominee — an honor (and potential win) it more than deserves.  The project originated while the director was sheltering in place with his family after fleeing the worst of the COVID-19 outbreak in New York City and evolved into an intimate, multigenerational fly-on-the-wall character study rivaling any fictional drama.  His stubborn older sister fights with her father because they’re so much alike (while nevertheless having vastly different opinions on the value of speaking out against injustice versus blending in and not challenging the status quo for the sake of practicality).  His younger sister is under pressure to decide whether or not to continue the family business, while her black boyfriend adamantly hates talking about race until the murder of George Floyd forces him to grapple with bigotry at a BLM rally (organized by a white waitress who works for the Sievs alongside a young white Trump supporter in the midst of reevaluating her philosophical outlook on life).  Currently available for viewing on YouTube, Amazon Prime, Apple TV, and elsewhere, Bad Axe is a stirring historical and personal snapshot of the United States at its best and worst.

No longer content to simply have and ruin everything, the 1% have upped their game since 2016, aggressively sucking all the oxygen from every realm of existence while farting their grievances and obsessions into our daily lives with ever-increasing ubiquity — all of which makes it, oh, so very satisfying to watch a shipload of odious aristocrats projectile vomit on themselves (and, in some cases, blow up real good) midway through Ruben Östlund’s savage, timely class warfare comedy.  Yet the film also works in its quieter, subtler moments with smart, funny dissections of the fashion industry, gender dynamics, and the humanity and hypocrisies of people at all levels of society.

3. The Banshees of Inisherin

The breathtaking terrain of Achill Island (doubling as the fictional title community of writer/director Martin McDonagh’s Irish Civil War fantasia) is practically worth the price of admission all by itself.  But what really sticks with you is the emotional residue in this tragicomic fable of familiarity breeding contempt (yet not necessarily extinguishing love) within the claustrophobic relations of people struggling against the inertia of circumstance, culture, tradition, and nostalgia.

4. The Blind Man Who Did Not Want to See Titanic

The intriguing title of this Finnish feature film hooked my interest — but the funny, charismatic lead performance of Petri Poikolainen as the indomitable lead character kept me watching.  And by the end, I realized director Teemu Nikki had delivered one of the most singular cinematic visions in recent memory.  The less you know going in the better, but let’s just say The Blind Man Who Did Not Want to See Titanic seems like one kind of movie at first before veering into unexpected waters, vividly enhanced by effective camerawork specifically designed to emphasize the protagonist’s worldview while shifting our own.

Writer/director Jordan Peele gets bonus points (a) for coming up with an entertaining summer blockbuster for adults that (b) was that rarest of cinematic endangered species — an original idea not based on an existing comic book, video game, toy line, or old TV show — and (c) telling a suspenseful, unpredictable science fiction story with an extraterrestrial element that felt truly alien.  Did we need the monkey subplot?  Maybe not, but it sure wasn’t dull.  And even if some of the parts didn’t entirely fit, there were more than enough great moments (and 1,000 volts of Keke Palmer) to power an electrifying big screen experience.

6. The Kids in the Hall: Comedy Punks

It occurred to me while viewing this tribute to Canada’s second or third favorite comedy supergroup that I’d maybe only seen a few actual episodes of their eponymous 1989-1994 sketch series.  Yet my lack of familiarity with the show barely mattered, since the spark that makes Comedy Punks work is the laugh-out-loud — well, comedy, both in the present-day interview segments with the troupe and the clips from their oeuvre sprinkled throughout.  Studded with tributes from celebrity admirers, the movie’s the best kind of brain candy (and obviously a must for superfans).

In the scamocracy of a money-driven society, who amongst the 99% hasn’t dreamed of wising up, going rogue, breaking bad, and finally beating the cheaters at their own game?  Versions of that fantasy have fueled the cinematic crime genre since The Great Train Robbery in 1903 — with the unfortunate side effect of conveying “folk hero” status on way too many psychopaths (see: every Scarface poster hanging up anywhere).  By comparison, writer/director John Patton Ford offers a more layered, empathetic, yet still realistically hard-edged take on the seductive lure of lawlessness (featuring producer/star Aubrey Plaza in a raw, career-best performance).

Brett Morgen’s 140-minute tribute to the life and music of David Bowie is such an explosion of sensory overload (especially in its IMAX iteration) that it’s hard to recall analytically in terms of specific scenes or its overall narrative structure.  Instead, by the end, you’re left with the twin sensations of giddy post-concert euphoria and waking from, yes, a surreal daydream of the iconic chameleon’s extraordinary evolution from birth to Blackstar.

9. FIDDLER’S JOURNEY TO THE BIG SCREEN

A mitzvah for all devoted fans of Fiddler on the Roof, director Daniel Raim’s charming documentary is simultaneously a tribute to the beloved musical and its cinematic adaptation, an entertaining behind-the-scenes show biz tale, and (perhaps most importantly) an invaluable historical time capsule packed with first person recollections from the cast and crew, including the film’s (non-Jewish) director Norman Jewison, the lyricist Sheldon Harnick, and surviving cast members Topol and Rosalind Harris.

In a better cinematic year, The Fabelmans would only merit an honorable mention spot given Steven Spielberg’s chronic fear of subtlety (as his characters basically scream every important message in the movie from “anti-Semitism: bad!” to “follow dreams: good!” lest we miss anything).  Yet blatant audience manipulation can also be enjoyable when it’s done well — and thus the meta movie geek fun of knowing the director knows we know his tricks in this semi-autobiographical origin story about how he acquired them (bolstered by a pair of great scenery-chewing cameos by Judd Hirsch and David Lynch) arguably make up for most of the eye-rolling dialogue and the cringier moments of a performance by Michelle Williams that kinda sorta works by the end.

In the real world, professional orchestras are peopled with fascinating individuals — so why devote 158 minutes to an unpleasant fictional conductor without giving us more of a sense of how she got that way or why we should care?  And why spend even still yet more time in 2022 beating the dead horse of “cancel culture” without offering a fresh take on it?

Most Disappointing: THE NORTHMAN

Robert Eggers made trees, a goat, a seagull, beans, and drunkenness memorably spooky in The VVitch and The Lighthouse, yet somehow managed to make Vikings, pillaging, and even Bjork dull in this overlong, overly Botoxed slog.

Critics have praised the actors for doing their best in The Whale while savaging Darren Aronofsky’s latest film as hateful, vile, dull, repetitive, trite, maudlin, tone deaf, pretentious, and exploitative.  Having seen Requiem for a Dream, I believe them.

When Margaret Atwood’s dystopian novel “The Handmaid’s Tale” came out in 1985, the author said that the violence against women...
Film