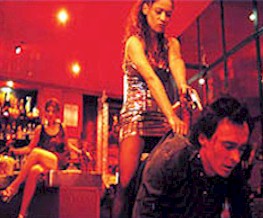 How far out does a movie have to be for it to get banned in France? Baise-Moi (Fuck Me), the film that Virginie Despentes adapted from her novel and co-directed with Coralie Trin-Thi, can&#146;t be shown in its home country. After seeing it, though, I think France might be on to something. One needn&#146;t mind about the movie&#146;s morals&#151;Baise-Moi is an extreme aesthetic hazard. France has merely exported an undesirable element, the same way that Cuba once sent us a flotilla of their criminal and insane. Forget that we&#146;ve somehow reached the point where France makes movies that they can&#146;t show, while America shows movies that it can&#146;t make. Now that the French have taken the first step and banned Baise-Moi, the sensible thing to do is to finish the job by putting every print of it into a rocket-ship and shooting it into space. The world needs this movie the way it needs a comeback of the plague.

Baise-Moi opens in a city outside France, and at first it seems it&#146;s going to be a multi-character tapestry set in a Gorkiesque universe of the destitute and abandoned. In a few short minutes it introduces a cluster of junkies, hookers, and gangsters, and moves between them with such little change in emphasis that it takes a while to figure out that the main characters are Nadine (Karen Bach), a soul-deadened streetwalker who&#146;s happiest masturbating to pornographic videos, and a bitter little cupcake named Manu (Raffaela Anderson). The two young women hook up just as their lives have taken dramatic (and violent) turns, and to pass some time and blow off some energy, they set out on a roadtrip. But their jaunt quickly turns into a killing spree: as the two little burnouts drive cross-country, they begin murdering people, first for money, then for kicks.

They&#146;re also sexually insatiable, and it was Baise-Moi&#146;s sexual content that got it banned. Manu and Nadine pick up a variety of men with whom they have sexual encounters, and the movie&#146;s generous helpings of sex are all unmistakably real. No body doubles were used, not even in the porno-style close-ups of penetrated cavities; it truly is the actors&#146; cleaved and jouncing genitalia that we see slamming away at each other. (Some of the cast members, including Bach, appear under pseudonyms.) And when there isn&#146;t any sex, the movie falls back on its violence. At least it isn&#146;t real, but it&#146;s still not meant for the faint of heart. In addition to its multiple shootings, Baise-Moi includes bludgeonings, stompings, a horrific double gang-rape, and one truly arcane delight: a man getting shot by a gun that&#146;s been pushed up his rectum. Despentes casts a romantic pall over the movie as Manu and Nadine near the end of their rampage, but by that time it&#146;s hard to understand why she&#146;d even bother; the audience is far too numbed by excess to respond to her characters any more.

Baise-Moi&#146;s title is a dare: &#147;Fuck me and see what happens to you.&#148; At the beginning, Manu and Nadine are pinned under society&#146;s thumb, crushed by poverty and brutalized by the men in their lives. For the first third of the movie their killing-and-sex spree seems like the result of a conscious decision to be out of control&#151;a desperate push for empowerment by people who can never know real power. It&#146;s an idea that could be worthwhile in the hands of a filmmaker with a keen moral edge and the imagination to make it sing, but for Despentes it&#146;s merely a pegboard on which to hang unexamined assumptions about sexual politics and the effect of pop culture on modern life. Despite its assault on cinematic taboos, Baise-Moi is an academic work; its ideas feel like they were incubated in a college classroom, and its anger is strictly for show.

About halfway through its running time, Baise-Moi veers from grungy naturalism towards a Godardian self-awareness when Manu complains to Nadine that as killers they should be talking in snappy patter&#151;in movie talk. And whereas their early killings are presented with a casual sense of verite, the movie&#146;s climax sees them striking the statued postures of Tarantino&#146;s photogenic gunmen as they slaughter the clients of a sex club. Despentes is saying that exposure to mass culture is deforming our identities, but at this stage of the game that&#146;s about as bracing an idea as the notion that people are bipeds. In Terrence Malick&#146;s Badlands a young couple embarks on a killing spree in part because they&#146;ve derived their understanding of life from pop culture, but their characters are also inflected by other things&#151;a truly alien notion of gentility, and their complicated response to Nature. Manu and Nadine are stripped of any sensitivity or context; they&#146;re just mechanical birds being made to sing in the little cage that Despentes has trapped them in. Even their youth (despite her ripe body, Manu has the face and manner of a 15-year old) doesn&#146;t express anything about whatever generational tensions may be gripping France today; this duo seems no more representative of youth at large than the killers at Columbine High did. When will the punks (and the post-punk punks) realize that these one-note howls of disaffection are radical only on their surface&#151;that they&#146;re just as sour and limiting as complacency is for the bourgeoisie?