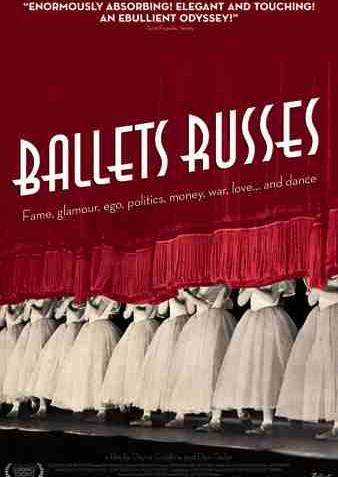 Ballets Russes, a new documentary by Dayna Goldfine and Dan Geller, is a case of somewhat misleading advertising. The film isn&#146;t, in fact, about the original Ballets Russes at all. Serge Diaghilev&#146;s company of Russian dancers took Paris by artistic storm in 1909 and continued, in a convergence of genius, to revolutionize ballet until Diaghilev&#146;s death in 1929. None of this is in the movie. Not Nijinsky, not Fokine, The Firebird, Rite of Spring nor Apollo and The Prodigal Son by a young George Balanchine.

The slightly confusing saga presented in the film offers not one but two post Diaghilev groups both co-opting the brand name and hitting the road, internationally, for decades. Although these imitation companies, the Ballet Russes de Monte Carlo and the de Basil Ballet Russes, named after its director, an ambitious but balletically untalented Colonel Wassily de Basil, never made the artistic history of the original, they served another purpose, touring incessantly via train, boat and eventually plane, taking ballet to practically every corner of the globe, until finally running out of steam in the 1960&#146;s.

Using extensive interviews with some charming octogenarian dancers, hobbled-together snippets of actual performance and narration to make some chronological sense of things, a moderately engaging historical document is created. Still, an hour-and-a-half of pure dance, preferably of the original Ballet Russes choreography in reconstruction, would probably be a lot more interesting than this balletic history lesson.

At least, the film-makers lucked into some great storytellers, especially in Freddie Franklin, a British dancer who partnered the legendary Alicia Markova for years. Franklin has made a late-in-life career out of the restaging of some of the classic ballets of Leonide Massine. Apparently he never forgets a single thing, step or story. He is even shown onstage with the Cincinnati Ballet at the age of 90, performing a character part with great flourish. Other surviving stars such as then "baby ballerinas," who were chosen to become prima ballerinas at 12 and 13, still carry with them a Russian glamour crossed with the ballerina&#146;s sense of tragic nostalgia, the memories of women who lived their artistic primes before they even had a chance to grow up.

What doesn&#146;t come across in the film is the sheer impact the dance and the dancers must have made on regular people, the audiences in every podunk town in America, Europe, Australia and even South America, the folks who had the occasion to witness one of these one-night-stands. Since then, ballet has become more ubiquitous than exotic–like Chinese food, available everywhere. Once upon a time, however, the Russians were coming, and they were dancing.