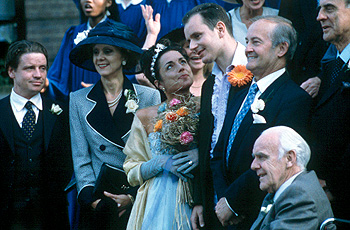 Writer/director Jasmin Dizdar’s feature debut, Beautiful People, opens on a London bus. Passengers politely ignore one another as people file in and out, until an enormous bearded man climbs aboard. He sits for a moment, then seems to recognize another passenger. He calmly steps over to the man and begins to brutally beat him. The bus driver stops the bus and pulls them apart. The man explains in fractured English that he’s attacking a fascist, the Nazi who destroyed his Bosnian village. The bus driver calms him down ("We don’t do that here!") and returns to the wheel. A moment passes. The fight resumes.

So far, so good. Dizdar has managed in one short, beautifully realized scene to dramatize both the Bosnian conflict’s relentlessness and its opacity to outsiders. (We never learn, for instance, whether that "Nazi" is Serb or Croat, Christian or Muslim.) But the scene continues under the opening credits, accompanied by a frantically comic clarinet-driven folk song, as the men chase each other in the streets. The fight drags on endlessly, drowning the sharp satire in crude slapstick. By scene’s end, several excruciating, unfunny minutes later, we may as well be watching the Three Stooges.

The film explores the way London is touched by the Bosnian conflict both through the lives of Bosnian emigres and the adventures of Londoners in Bosnia. Dizdar provides a broad cross section of London, from harassed African immigrants to members of parliament, racist skinheads to BBC correspondents. There’s no overarching plot, just a series of vignettes about characters who drift through one another’s lives.

It’s a strategy derived from Robert Altman, though Dizdar lacks Altman’s casual dexterity. Beautiful People may aim for the kaleidoscopic, multi-character riffing of Nashville or Short Cuts, but it’s far closer to the crass satire of A Wedding. Dizdar hits each target square on the nose, then does it again and again.

Beautiful People is frustrating precisely because it so consistently undermines its own strengths. It’s a very brave and ambitious film, diving headfirst into the complexities of the Bosnian civil war. It’s impeccably acted and shot. It interweaves the stories of its dozen characters deftly. And yet, up until its final third, very little of the film actually works.

Dizdar is the author of a book entitled "Milos Forman: King of Satire." That’s a ridiculous claim, of course: if Forman is the king of anything, he’s the king of plodding, overstuffed literary adaptations. But his early films – The Fireman’s Ball and Taking Off are the best known – were in fact heavy-handed attempts at satire, and they misfired for much the same reason as Beautiful People. Satire, if it’s any good at all, is brutal and offensive. It implicates the audience, pointing out our own shortcomings rather than letting us enjoy laughing at those of others.

Dizdar, like Forman, too often defangs his satire, drawing most of his characters broadly enough to keep us from seeing ourselves too clearly in them. Gilbert Martin plays a BBC correspondent who insists on a trip to Bosnia to "make people give a shit." When he returns, he’s shell-shocked and suffering from "Bosnia syndrome," an empathy for victims so profound that he imagines himself to be one. He’s soon visited by a BBC executive who demands the footage he shot. Martin refuses to give it up, spurring the executive – who has obviously never stepped outside of a studio – to tell him to "Just leave Bosnia to me." It’s an easy laugh, inviting us to feel superior to the executive’s callous presumptuousness. But it begs a larger question: don’t we, as news viewers, ultimately side with the man we’re invited to ridicule, since we of course want to see the footage? (In fact, the film wrings its biggest laugh from a broadcast of this footage.) And if the ultimate aim is to make us "give a shit," wouldn’t a better film make us realize that the executive, however heartless he might be, is doing the right thing by broadcasting it? Rather than risk alienating his audience by pushing us to question our role in exploiting tragedy, Dizdar opts for the belly laugh, and undermines his film.

For all its problems, Beautiful People improves markedly as it goes along. The final twenty minutes is surprisingly complex and unsettling. The frantic pace lets up, so that we can follow each story more attentively, and we’re rewarded with a film that’s finally become as hard-edged as it thinks it is. When a "former" soldier ("I am from the former Yugoslavia – we are all former"), explains his past to a shocked crowd, Dizdar pulls the rug out from under the audience, challenging our easy empathies and leaving us stranded at movie’s end, unsure how to judge what we’ve just seen. It’s an audacious move, and it leaves one hoping for a second film that’s as daring in its entirety as Beautiful People is in its final moments.