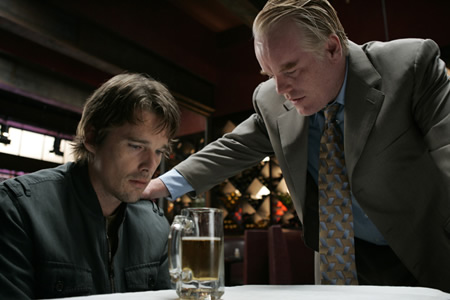 It starts with quite the graphic sex scene, then launches into a jewelry store robbery gone horribly, violently wrong. Both scenes elicit strong visceral reactions, especially considering that one of the participants in the sex scene is Marisa Tomei. However, they’re fairly representative of what the movie as a whole tries to accomplish. That is to say Devil possesses a dramatic power akin to watching a big train wreck, but it’s an elaborate Rube Goldberg device with no real heart at its center.

The opening sex between married couple Andy (Philip Seymour Hoffman) and Gina (Tomei) ends with Andy exclaiming, “I don’t know what the hell happened. We’re an old married couple.” This small canard only hints at the crack in their lives that will soon turn into an enormous chasm. Andy, an accountant at a real estate firm, has been secretly funneling money for personal use to sustain his drug habit and liaisons with a male prostitute. His younger brother, the constantly frazzled Hank (Ethan Hawke), is similarly burdened financially, owing several months of child support to his ex-wife. Andy sells Hank on a foolproof plan that proves to be anything but: robbing their own parents’ jewelry story in Westchester. Andy reckons that they already know the store intimately and that their parents will recover the losses through insurance. All of this is revealed in flashbacks after we see the botched robbery in the beginning.

The movie keeps jumping around in time focusing on different characters’ perspectives, but the transitional flash cuts are clumsy and jarring. It doesn’t help that there isn’t really anyone to root for here. All the characters just make bad decision after bad decision leading to a predictable, inevitable downward spiral toward tragedy. Devil doesn’t compare well with stories in a similar vein like A Simple Plan or Lumet’s own Dog Day Afternoon in which the characters feel like more than pieces on a chess board.

That said, Lumet’s strength lies in his ability to direct actors (he’s never been a visual impresario). Whatever he does, he apparently lets them feel safe to be vulnerable. He also lets them stretch, although this sometimes results in stretching into overindulgence. Jagged crying scenes are common in his movies and there are several here. Hoffman and Tomei fare best. Tomei braves an exceptional amount of nudity that few current Hollywood stars risk in the era of potentially embarrassing internet screen captures. Helping them out a lot, she and Hoffman actually get to show a relatively wide range of emotions. Hawke, on the other hand, just plays an emotional wreck throughout, while Albert Finney, as the father, just fumes with vengeance.

Writer Kelly Masterson comes from a playwright’s background. It shows in his dialogue, which has a conventional stagy feel with little subtlety. It’s overly expository both in detailing the situation of the characters and their emotional states. It’s a tribute to the talented cast that they manage as well as they do.