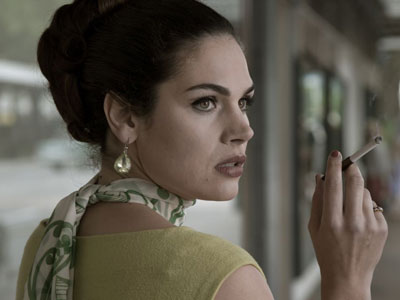 A group of young women leave dreary post-war Holland for, they hope, better lives in New Zealand. Three of them become friends. On the plane, they meet Frank (Torenstra), who takes a special shine to shy-but-sensual farm girl Ada (Karina Smulders). “Bride Flight,” a Dutch film set mostly in New Zealand, follows the four characters’ often interlocking lives for the next 60 years.

Two of the young women have fiancés-whom they barely know-awaiting them. On arrival, Esther, a flamboyant Jewish fashion designer (Anna Drijver), promptly dumps her devout intended, who wants her to keep Kosher and raise children to make up for all the Jews lost in the Holocaust. Ada is shocked to be forced to ride the six hours to her new spouse’s home—a barely-converted concrete bunker—in the back of his pickup truck (the minister who will marry them gets to ride with him in the truck’s cab). Only Marjorie (Elise Schaap), who has already adopted an English name before leaving home, finds contentment in what awaits her, though not before suffering a heartbreaking disappointment.

If this sounds like the makings of a melodrama, it is—but an engrossing, skillfully made melodrama. Much of it, of course, centers around sex (and its frequent consequences): miscarriages, unwanted pregnancies, infidelity, jealousy. . . . Frank, the flirtatious young farmer whom the women met on the plane, plays a recurring role. His and Ada’s love scenes sizzle: Smulders and Torenstra have genuine chemistry.

We’re given only hints at what the young women have fled from: floods, food shortages, cold. But it’s enough to make us empathize with them. The acting is convincing throughout.

All of these scenes are actually told in flashback: the film opens with the now-elderly Frank (Rutger Hauer of “Blade Runner”) touring his well-established vineyards and winery. But Frank dies, and the other characters-now, of course, equally elderly and played by different actors-reunite at his funeral. Old secrets are revealed, old wounds reopened.

The film was shot mainly in New Zealand-picturesque and quaintly old-fashioned in the 50s and 60s episodes-with additional scenes filmed in Luxembourg. Yes, the running time is a bit excessive; some minutes of scenery could have been cut. But not too much. “Bride Flight” is a leisurely, satisfying chick flick. And I’m a chick who always welcomes a good chick flick.