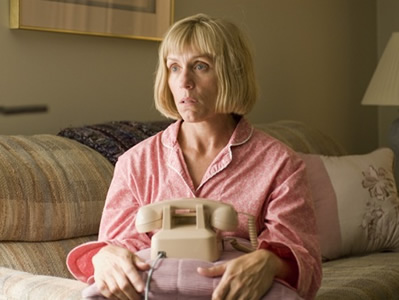 Burn After Reading takes place inside the Beltway. The action of the film is precipitated by fitness center employee Linda Litzke (Frances McDormand), who yearns to have multiple cosmetic surgeries, but has no means to fund them. She says that she’s “gone as far as she can go with this body”— a quintessential Coen Brothers’ version of a 21st century obsession.

In the initial scene of the movie, Osborne Cox (John Malkovich), a bow-tied angry low-level CIA analyst, quits his job rather than be demoted for his alcoholism. His second career involves continued drinking and writing his unimportant, though self-important, memoirs.

His shrewish domineering wife (Tilda Swinton), a most unlikely pediatrician, wants to divorce him and continue her affair with Harry (George Clooney), a wild-eyed married federal marshal whose life seems to consist solely of sex and exercise.

When a disc containing Cox’s memoir winds up on the floor of Linda’s fitness center, Linda and ditsy trainer Chad (Brad Pitt) decide to extort money from Cox in exchange for the disc. They think it’s the perfect plan to raise money for Linda’s body makeover. And as they say,” hilarity ensues.”

Unfortunately, not much hilarity ensued in Burn After Reading. The movie is neither a laugh-out-loud screwball comedy, nor is it a perceptive satire. It’s not a spy film or a thriller. The Coen Brothers have created a group of unfunny ignoramuses who find themselves sadly over their heads in intrigue. John Malkovich’s Osborne Cox merely screams and curses throughout the film, while George Clooney has a fine time mugging for the camera. Perhaps in an homage to Fargo, there is graphic senseless unexpected violence.

There are some amusing and interesting aspects to Burn After Reading. The twisted plot keeps the audience guessing.The pace of the film works well. Frances McDormand and her sidekick, the happy energetic, but just plain dumb, Brad Pitt, work well together. Audiences will love seeing a blond-tinted Brad Pitt in this role. Ted (Richard Jenkins), manager of the fitness center, is in love with Frances McDormand’s Linda and shows some genuine emotion.

The CIA guys, well acted by J. K. Simmons and David Rasche, are entertaining, and perhaps realistically portrayed, in their desire to make the problems caused by Linda and Chad just go away. George Clooney’s basement workshop contains a secret machine that is quite funny.

However, these are sideshows. While the end of Burn After Reading dribbles away, we realize that we don’t care very much about the characters and their futures.