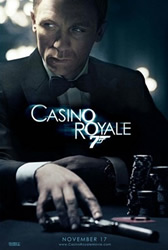 It’s a pleasure to write a review of a good film, especially for one that I was prepared to find derivative and tired. But Casino Royale has all the best attributes of a James Bond film without any of the negatives. Instead of the tepid Bonds we’ve seen in recent years, we have the delight of watching Daniel Craig. He’s ruggedly handsome, blue-eyed and buffed, yet he can act. And the film is character-driven enough to give him an opportunity to show a variety of emotions that we haven’t seen from other Bonds.

Although it takes place in the present, Craig plays a young Bond just earning his “00” status…his license to kill. He is already self-possessed, unemotional, ingenious, relentless and sharp. However, during the film, we see emotion creep into his life through his growing relationship with Vesper Lynd, a lovely British treasury agent who accompanies Bond on his mission. She is believably played by Eva Green.

Casino Royale has a strong plot with some twists and turns along the way. Bond is pursuing several groups of bad guys, including the ultimate villain (Mads Mikkelsen) who is a banker for terrorists and dictators — a nice change from the typical megalomaniac with the underground cave. At the Casino Royale, Bond plays in a high stakes Texas Hold-em poker game against the banker in order to win the terrorists’ network’s money. The poker scenes at the Casino, with their juxtaposition of sophistication and violence, are as suspenseful as the heart-pounding action scenes, including one nerve-racking chase on a towering crane perched far above the ocean.

None of the cartoonish, one-dimensional and exaggerated elements of other Bonds movies appear in Casino Royale. So, if you are looking for the droll, foppish Bond who practically winks at the audience, you won’t find him here. Nor will you find tons of gimmicks like the flying car and other Q inventions. Although Bond uses modern computer, GPS and cell phone technologies, he needs to rely on his wits and his physical skills. In addition to Judy Dench’s able portrayal of a stern, but secretly indulgent M, the film’s amazing stunts and great camera work add significantly to the film.

A few slight criticisms…I didn’t like the pre-credit opening scene. Instead of the over-the-top action scene that would set the mood in earlier Bond flicks, Casino Royale begins with a gritty, unpleasantly graphic black and white scene of Bond’s first kill. But then the schmaltzy music begins and creative animated credits roll, and we’re off. And then at the very end, we need an explanation from M in order to understand the characters’ behavior fully.

To cut to the chase…Casino Royale is a great action movie, but, it rises above the genre because of Daniel Craig’s wonderfully fresh portrait of Bond and a great script. This is an exciting and engrossing, stand-on-line, see-on-a-big-screen, buy-the-popcorn-movie.