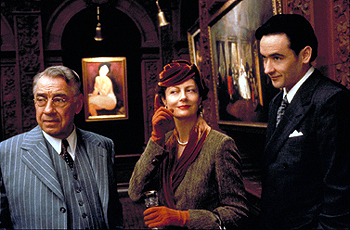 Blitzstein works including excerpts from The Cradle Will Rock..Leonard Bernstein (1998)

The Cradle Will Rock: 1985 London Cast

Cradle Will Rock is a rollicking, joyous excursion into 1930’s American cultural history. It has the structure and feel of old movies like Grand Hotel or more recent movies, particularly Robert Altman films like Nashville or The Player, movies in which threads of several different stories are meshed into a flowing whole, the interrelationships among the different characters and plot lines interthreaded to explicate the themes of the film. The Player starred Tim Robbins and surely influenced his work as both writer and director of Cradle Will Rock.

At the center of the story is the 1936 New York production of Mark Blitzstein’s musical drama, The Cradle Will Rock, a theatrical expression of idealistic hope for the struggling union movement, a cry from the left for social justice and fairness in the midst of economic depression. Financed by the Federal Theatre Project, which subsidized theatre productions across the country, the opening of the show is blocked by bureaucratic funding cuts, by implication politically motivated and inspired by concurrent congressional hearings into the Project, an earlier version of the Red-baiting McCarthy hearings that came two decades later. Robbins weaves scenes of the hearings through the film, using testimony taken directly from the Congressional Record.

Cherry Jones plays Hallie Flanagan, who headed up the FTP and testifies before the committee. Flanagan is a voice of reason with a passion for the theater and Jones’ performance in this pivotal role couldn’t be better. The entire film, for that matter, is full of star turns, some of our best actors obviously having an enormously good time, or, at the very least, acting so well under Robbins’ skilled direction that you are convinced they are.

John Cusack, as a young, somewhat naive Nelson Rockefeller has a subplot with Ruben Blades as Diego Rivera, commissioned by Rockefeller to paint a mural in Rockefeller Center. Rivera’s mural turns out to be too radical for Rockefeller and a power struggle ensues. Susan Sarandon is wonderfully comic in her best role in years, playing Margherita Sarfatti, a former mistress of Mussolini’s who is playing multiple power games with art, journalism, and supplies for Mussolini’s building war machine. Vanessa Redgrave is Countess La Grange, a slyly satiric portrayal of a wealthy dilettante whose sympathies are on the left. Redgrave, in the midst of all the fun, seems to be having the time of her life; she emits her deep throated, pleasure-filled laugh as events get ever more complicated.

In yet another subplot, Bill Murray plays a somewhat schizoid ventriloquist (is that a redundancy?) romantically rejected by Joan Cusack, as Hazel Huffman, who testifies with smarmy self-righteousness before the congressional committee. John Turturro is a struggling young actor who leaves his Italian family’s home because of their fascist leanings. He gets to do a rousing scene in the great finale, the renegade performance of the banned play. And Hank Azaria is convincing as Blitzstein, tortured by memories of his late wife and his own insecurities. Only Angus Macfadyen’s Orson Welles is off the mark; it overplays Welles’ taste for personal high drama and underplays his intelligence.

With all that, we’ve barely touched the surface of what Robbins has crammed into Cradle Will Rock. He tackles themes of the use and abuse of power; the risks of taking sides – and, as well, the risks of not taking sides; social justice; corruption in high places; the courage to speak for what is right. Some may argue that Robbins bit off more than he could reasonably chew, and, indeed, a little less might have been more here, but that’s quibbling. This is intelligent, complex, wildly ambitious film-making and the product is a thoughtful and deliciously entertaining romp through a part of our history we cannot afford to forget.