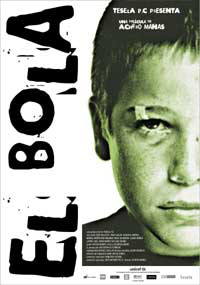 El Bola is a fine film rescued from obscurity by a new distributor with a novel idea. FilmMovement.com is offering new films — art films, independent films, foreign films — on a subscription basis. (You can also buy past releases such as El Bola on DVD at their website.) El Bola has played in a handful of art houses around the country, but the odds on catching it have been against most filmlovers, as is the case with so many "small" films that get swallowed up in the megaplex economics of film distribution.

The film centers on a twelve year old boy, Pablo (Juan Jose Ballesta), nicknamed "El Bola" or "pellet" for the ball bearing he carries with him for good luck. He hangs out with some other boys from school, but wisely doesn’t participate in their particular variation on the game of chicken, this one requiring removing a bottle from the tracks in front of a speeding train. Pablo, perhaps, knows more about death than his contemporaries; before his birth there was a brother who was killed in an automobile accident and family pilgrimages are made to the grave. Pablo’s dour father owns a hardware store, where the boy helps after school. At home, his mother struggles to care for his incontinent grandmother.

A new boy, Alfredo (Pablo Galan) arrives at schooland the two become friends. Alfredo comes from a family that is as warm and joyous as Pablo’s is tense and miserable. Alfredo’s father, Jose (Alberto Jimenez), a tattoo artist, is going to visit his friend, Felix (who is Alfredo’s godfather) in the hospital, where he is dying of AIDS. Director Achero Manas leaves the nature of the relationship between with Alfredo’s father and Felix unspecified. There is a clear suggestion that Jose is bisexual, but the point is not pressed.

Through a series of incidents, it slowly emerges that Pablo is the victim of a brutally abusive father. As Pablo’s friendship with Alfredo’s family grows, his father becomes suspicious and, in time, fearful of being found out. The film reaches an intense and wrenching climax in a particularly vicious beating, after which Pablo runs from home to Alfredo’s family. But solutions, it turns out, are not so easy and Jose’s character is put to an unexpected test.

Manas, who also wrote the screenplay, lets the unfolding events reveal the nature of his characters. He deliberately and skillfully uses ambiguity to suggest possibilities which imbue the theme with added depth and resonance. There is certainly a pronounced contrast between a family that is traditional and proper on the surface, but conceals criminal dysfunction and, on the other hand, a nontraditional family in which love and reason prevail.

But at the center is Pablo, whose position as a trapped innocent is painfully heartrending. Manas elicits from young Ballesta a performance of natural grace–unforced, boyish, matured beyond his years by his harsh experience, but still essentially a defenseless child. The film criticizes a legal system that makes it difficult to extract such a victim from an intolerable situation, but that is a secondary point to the graphic portrayal of a victim brutalized in the place where he should be most protected.