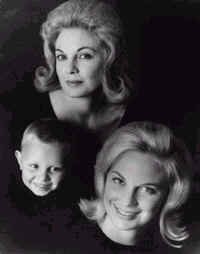 On the face of it, Arthur Dong&#146;s documentary, Family Fundamentals, is the stirring saga of three families confronted with homosexuality in their midst, and how they imperfectly, and with wrenching results, confront the issue. But, in his analysis of the different sides to the gay issue, and in the presentation of diverse viewpoints, Dong (Coming Out Under Fire, Licensed to Kill), who is himself gay, is ultimately analyzing two diametrically opposing social movements: the deeply conservative influences of organized religion and the individual rights obsession of political liberalism.

Family Fundamentals trails the "coming out" consequences for three gay people and the irreparable changes that occur in their relationships with their close ones. The first is Susan Jester, the lesbian daughter of Kathleen Bremmer, a Pentecostal church leader in San Diego. The colliding positions of mother and daughter are immediately apparent. Susan is openly gay and has taken an active role in the gay civil rights movement. Kathleen is one of the organizers of the San Diego Christian Trauma and Sexuality conference that advocates reparative therapy for homosexuality and has conducted monthly support group meetings for parents with gay children. Kathleen is further troubled with the fact that Susan&#146;s son–her grandson–David Jester, is also gay.

The second case is Brett Mathews, a former First Lieutenant in the U.S. Air Force who was discharged from the service because of his homosexuality. Although given an honorable discharge, Mathews was stripped of his veteran&#146;s benefits. His father is a Mormon Bishop in Utah and a direct descendent of the original Mormon settlers of Tooele County, Utah in the 1850s. When Brett returns home for his grandmother&#146;s remarriage, a remarkable conflict is set to take place between the family, which maintains a prominent religious and social role in its community, and the rebel son, who has wandered far astray from the very tenets of his religion.

The family travails of Susan Jester and Brett Mathews highlight the influence of Christian religion on attitudes towards homosexuality. Anti-gay advocates cite the Bible to argue that Christ did not want men or women to fornicate with their own kind. Any sexual association with members of the same sex is a sin and is pandering to the devil. Pro-gay advocates argue that nowhere in the Bible is it stated that gay relationships are acts of sin. Christ&#146;s enduring message was about Love, and gay activists argue that this message is lost in the current gay-hate rhetoric.

The political dimensions of this conflict are highlighted in the third case, where Dong interviews Brian Bennett, who, from 1977 to 1989, was the Chief of Staff, campaign manager, and legislative aide to former U.S. congressman Bob Dornan (Republican elected from California). Paradoxically, Dornan is one of the most virulent anti-gay advocates in the country. Dornan was a father figure to Bennett; Bennet called Dorman by his family name: &#147;Poppy.&#148; Bennett even lived with the Dornan family for six years, but when Bennett disclosed he was gay, no dialogue was possible with the family and the outcome was estrangement. Nevertheless, Bennett continues in the Republican Party. Bennett does not believe that commitment to the gay cause is sacrificed by remaining in a conservative party. Rather, he thinks change comes from within and continues to work in a party whose leaders often openly denounce homosexuality.

Dong&#146;s film is not a diatribe on gay victimization. Instead the focus is on families and the internecine conflicts that ensue when family members turn out to be gay. The Los Angeles Times reported that Dong persuaded Bates College, in Lewiston, Maine, to reschedule the screening of Family Fundamentals from October 11 to a week earlier…Parents Day. Dong wants to focus on the family and often, while interviewing gay people, he even reminds them that their family loves them and waits for their responses. The interviewees seem a little taken back, but finally reply that their families do love them, but that that love is conditional, and does not accept their sexual orientation.

Family Fundamentals has moments of great poignancy and insight. In interviews with Kathleen Bremmer&#146;s anti-gay group, the interviewees frequently paint gay people themselves as victims of the gay culture, claiming that it does not allow them to leave its fold even if they wanted to. The Christian Right&#146;s commiseration with gays who are allegedly ensnared by a virulent gay culture is a curious twist, indeed.

In another remarkable interview, Brian Bennett describes how a talk show discussion on Christianity encompassing gay love made him realize for the first time that homosexuality may not be against his religion. As he says this, tears start running down his cheeks and we understand that this was the moment of his epiphany. Bennett is one of the smartest kids on the block and a seasoned politician, yet he always felt guilty about the mismatch between his religion and his sexual orientation. Such is the power of organized religion, and no one, not least people following alternate lifestyles are immune from its influence.