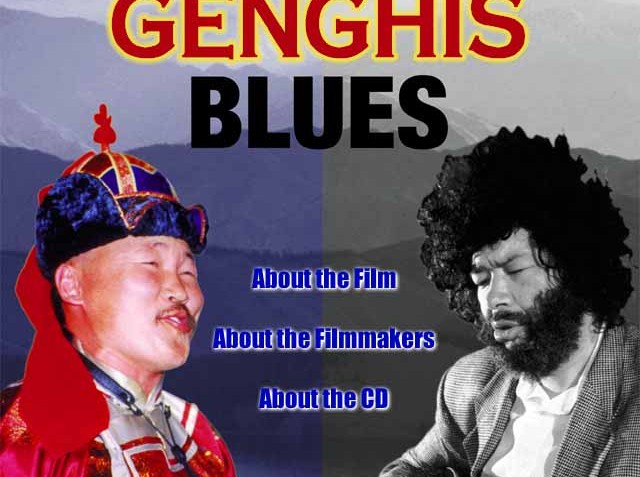 … Genghis Blues is one of those movies that starts out simply and then grows and grows. By the time the lights come up you will feel as if you have been taken on a fascinating trip with a bunch of brand new friends. The film has everything a good documentary should have – a fabulous story, a unique location, and the best music I have heard in a movie since The Harder They Come.

Paul Pena, blind San Francisco bluesman, whose heritage is from the Cape Verde Islands, and who has played with great bluesmen like T-Bone Walker, Muddy Waters and B. B. King, spends his free time listening to shortwave radio. One night, on an obscure feed from Radio Moscow, Pena discovers amazing music called throatsinging. It comes from what is now the Autonomous Republic of Tuva, wedged between Siberia and Mongolia, and is unlike anything he or we have ever heard. Some Tuvans have mastered a style of singing in which more than one note can be sung at a time. It sounds like a bagpipe, or jaws harp, but done with only the voice.

Amazingly Pena, who is a masterful guitarist and singer in his own right, teaches himself not only to throatsing, but also some basics of the Tuvan language. In 1995 he is invited to participate in a throatsinging competition at the National Theater of Tuva. Accompanying him on this journey are a band of misfits including Lemon DeGeorge, self-styled

"tree-trimmer, recording engineer, filmmaker and rock-and roller," ailing KPFK deejay Mario Casetta, who looks like George Carlin and has jokes to match, and the Belic brothers, Roko and Adrian, who are making their first professional feature film, and who say at the outset, "We really have no business making this film."

The center of the film is Paul Pena. He is perhaps the most musical person you will ever see. He takes Tuva by storm. When you see this large, awkward person being helped to his seat on stage, in a bus, or around a campfire, you can’t imagine what will emanate from him when a guitar is placed in his hands or a microphone next to his lips. Everything he says or sings drips with soul and honesty, especially the glorious song he writes about leaving Tuva and his new friends.

The other musicians in the film also shine, and all demonstrate a love of their art. Kongar-ol Ondar, in particular, the grand master of Tuvan throatsinging who becomes Paul Pena’s companion and good friend, shines with an internal beauty that is reflected in his face as he sings and plays.

There is an underlying theme here too: how can one man, unrecognized and unwanted in his own city and country, become such a hero to a culture so far away? The Tuvans we see on the screen seem alien to us, but as Paul Pena says, "Back home I’m the alien. Being blind is hard. I suffer from a lot of depression."

Genghis Blues is a low-budget documentary with few production values, but the Belic brothers and Paul Pena have managed to carry us with them into another world. The music alone is enough reason to see their film again and again.