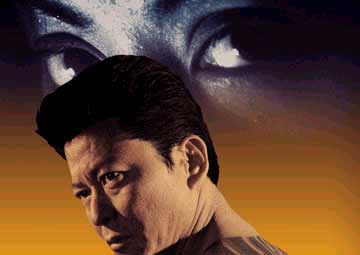 Takashi Miike is arguably the hardest working man in cinema. Since 1991, he&#146;s directed over 60 features in his native Japan, often releasing five films a year during periods of (for him) only modest output. With the international release of 2000&#146;s critically acclaimed Audition, Miike&#146;s burgeoning cult status in the west exploded. Thanks to the success of that film, which hinged on a meticulously calibrated tonal shift from a Vertigo-esque study of male voyeurism to one of sadistic female empowerment, Miike&#146;s work has become more palatable for distributors. Of course, that might not mean much for a director who makes seven films in one year, but it at least ensures a few of them a proper stateside theatrical release. The last two years have seen several of Miike&#146;s recent films, such as The Happiness of the Katakuris, Dead or Alive, and Ichi the Killer, meet their demand in the U.S.

Working in a straight-to-video industry that caters to the perversely violent instincts of its hungry fanbase, Miike has become notorious for conjuring up schlock imagery to blanch even the most prurient audience-member.Not for the faint of stomach, his films are easily recognizable for their kinetic brio, arterial spree and otherwise inventive uses of human bodily functions.Die-hard Miike fans argue over which scene &#150; the hooker drowning in a kiddie-pool of her own excrement, say, or the gangster strung up on meat hooks &#150; remains the most outrageous.Gozu, fans will happily note, checks off a number of the director&#146;s signature tropes, from lactating women to undead yakuza.

A gangster film crossed with a ghost story &#150; or perhaps a yakuza acid-trip flick &#150; Gozu follows two mid-level crewmembers, Minami (Hideki Sone) and his older, world-weary associate Ozaki (Miike-regular Sho Aikawa). Ozaki has been suffering hallucinatory outbursts of late, much to the consternation of their boss (Renji Ishibashi). In short order Minami is dispatched to take Ozaki out to a remote gangland garbage dump in Nagoya and leave him to sleep with the rusted-out Datsuns.But before he is able to finish the job, Ozaki&#146;s body disappears, leading Minami on a surreal journey to recover it and placate his irate boss back in Tokyo.

Gozu is pretty tame, violence-wise, in comparison to most of Miike&#146;s output.In place of the normal bloodletting, he opts for a wild surrealism that brings to mind both the rigorous weirdness of David Lynch and the twisted dark comedy of Luis Bunuel.Minami&#146;s attempts to find Ozaki&#146;s body are repeatedly thwarted by the discourteous locals he encounters. One hilarious subplot finds him dodging the advances of the innkeeper he lodges with, whose house is nearly flooded by her relentlessly lactating breasts.To make matters worse, Minami begins suffering from his own brand of phantasmagoric delusions.He is visited by the half-cow, half-man &#150; a figure from Buddhist mythology &#150; that gives the film its title.And when it seems that Ozaki has returned to the land of the living in the form of a beautiful young woman, Minami must decide between loyalty to his boss and affection for his partner.

In addition to being one of Miike&#146;s funnier films, Gozu is frequently one of his most beautiful.Digital video has enabled the director to work constantly on the cheap, but he makes the most of shooting on film here, emphasizing his hero&#146;s fish-out-of-water plight in a number of gorgeous establishing shots of Nagoya&#146;s low-slung factory skyline.The director&#146;s trademark low-angle shots in cramped spaces make the film&#146;s climactic scene, shot in a spare, claustrophobic white room with a single amber floor lamp, an unforgettable comic-horror set-piece.As far as gonzo head-trips go, this one&#146;s certainly worth the ride.

(16130)
$12.96
a general purpose, medium weight sketch paper intended for technique practices or quick studies with any dry media. This package contains one 12 by 9-inch side spiral-bound sketch book with 100 sheets of 60-pound acid free, lightly textured paper. Ma... read more
(as of January 21, 2021 - More infoProduct prices and availability are accurate as of the date/time indicated and are subject to change. Any price and availability information displayed on [relevant Amazon Site(s), as applicable] at the time of purchase will apply to the purchase of this product.)

(7736)
$6.99 (as of January 21, 2021 - More infoProduct prices and availability are accurate as of the date/time indicated and are subject to change. Any price and availability information displayed on [relevant Amazon Site(s), as applicable] at the time of purchase will apply to the purchase of this product.)
related posts