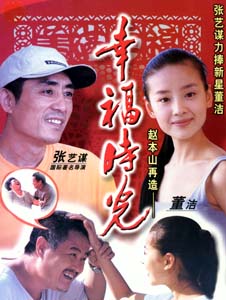 the book on which the film is based:

Shifu, You’ll Do Anything for a Laugh

For a decade and a half now, Zhang Yimou’s films have acted as a herald from China to the rest of the world, often arousing the ire of the Chinese government in the process. Rarely directly political, Zhang’s films almost always can be read politically. It is understandable that their humanistic values would be threatening to a repressive regime.

Combining the skills of an inventive storyteller with psychological insight and an eye for images that are both strikingly beautiful and emotionally telling, Zhang has produced a body of work that places him in the first order of world filmmakers. His early, Academy Award-nominated, Ju Douwas an in-your-face potboiler with images drawn from a textile-dying mill–lush colors and billowing fabrics–that remain fresh in the mind these many years later. Raise the Red Lantern was the story of the fourth wife in a polygamous household in the 1920’s, a story of conflict and frustration told in a claustrophobic setting that underlined the social and emotional distress of its heroine (magnificent Gong Li, frequent star of Zhang’s films).

More recently, Not One Less, the story of a thirteen year old challenged by the responsibility of being a school teacher, won accolades (if not box office) and The Road Home told the saga of a family, contrasting rural with urban values, tradition with change. In view of these rather serious predecessors, who would have imagined Zhang would venture into comedy?

Happy Times is a comedy, an improbable tale that leads from one preposterous setup to the next, linked by the engaging character of its protagonist, a fifty-year-old factory worker (Zhao Benshan) with a taste for zaftig women. A matchmaker leads him to a willing prospect who is all too ready to get married, but she wants a fancy wedding and names a price. Zhao is smitten and agrees, but, of course, he doesn’t have the funds. He and his friend Li come up with the idea of fixing up an abandoned bus as an hourly hotel for trysting lovers.

Zhao’s obese bride-to-be has an equally overweight son and a Cinderella step-daughter, Wu Ying (Dong Jie), the blind, 19 year-old daughter of her last husband. The miserable girl lives for the return of her father who promised to raise the money for surgery to restore her sight.

It is the character of Zhao that glues the unexpected turns of the plot together. On the one hand, he’s a fundamentally decent fellow, emotionally unguarded and vulnerable. On the other hand, when his hopes are confronted with obstacles, he responds by weaving an ever more complicated tangle of lies in an attempt to make things work. Whether painstakingly trimming down cheaper flowers to make a rose-like bouquet for his intended or creating a complete stage-setting for a massage parlor in an abandoned factory, Zhao acts out his desperate–and amusing–scenarios. The house of cards that he builds will inevitably come tumbling down, but his sincerity and human decency transcend the harmless follies of his plotting. And in the nicest way, the kindness that underlies his foolishness accomplishes his purpose, with an unexpectedly gratifying and bittersweet outcome.

Zhao Benshan is a delight as Zhao; he combines the perennial optimist who refuses to give up his hopes and the gentle buffoon with a caring heart. His energy and brightness energize the film. But it is Dong Jie who provides balance to the comedy in her portrayal of Wu Ying. She mixes a sympathetic touch of pathos with an innocence grounded with surprisingly gritty strength and good sense.

With Happy Days Zhang adds yet another notable accomplishment to his remarkable oeuvre, demonstrating a felicitous touch in this lighter, comedic mode, while never lessening the character-based strength of his story-telling.