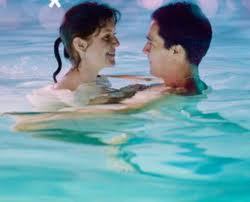 Hello I Must Be Going

“Hello I Must Be Going” is not a romantic comedy, although it’s billed as such. Rather, it’s a perceptive and sometimes humorous film that portrays two women who conquer traumas at the same time in their lives.
Melanie Lynskey (“Win Win,” “Up in the Air,” and TV’s “Two and a Half Men”) stars as Amy, a recent divorcee, who slinks back to the suburban Connecticut home of her parents, Ruth Minsky (Blythe Danner, Tony and Emmy(r) award winner, “Alice,” “Meet the Parents” series) and lawyer Stan Minsky (award winning Broadway, film and TV actor, John Rubinstein, “21 Grams”, “Someone to Watch Over Me”).

Selected as the opening night film for Sundance 2012, “Hello I Must Be Going” is a film for adults. As we watch, we think that we recognize and understand the Minsky family dynamics, but ultimately, we are surprised by their behavior.

After Amy’s husband left her, she becomes unable to envision any positive future for herself. She returns to her childhood room, dejectedly watching Marx Brothers films. The song from “Animal Crackers,” “Hello I Must Be Going” mirrors Amy’s mood of impermanence and indecision

While living with her parents, she reverts further into her insecure and timid self. Her parents regress also. They treat Amy like a child – suggesting potential dates, proffering unwanted career advice and chiding her for her unkempt appearance (Do you have to wear that same tee shirt every day?).

Amy and her father have a special relationship. He is supportive, but acknowledges his inability to discuss personal issues, as though his acknowledgement were permission for him to continue his behavior. John Rubinstein is excellent as the emotionally empty Stan.

Ruth is competent, capable, yet burdened by supporting her husband and running their household with its endless renovations. Ruth and Stan are trying to dig themselves out of the financial collapse of 2008. They plan for retirement and their long-awaited chance to travel. Blythe Danner is marvelous in the role of Ruth – an elegant, strong woman who hides her vulnerability until it overtakes her.

Amy begins an affair with a kind and loving 19-year-old actor (GIRLS’ Christopher Abbott). Slowly, she starts to leave her room, laugh and grow confident as she sees a new stronger vision of herself. I wonder how Blythe Danner’s daughter, Gwyneth Paltrow, would have handled the role of Amy.

Screenplay writer Sarah Koskoff said in an interview that the film is “… also about somebody who’s always in the background of her own life. Movies are so often about people who are larger than life: they’re geniuses, they’re incredibly gifted, people clap for them … – and it’s fun to see movies about people like that – but I was interested in another kind of person, the one who gives the narcissists the attention they need-and really pays a price for it. It felt like a story I’d been waiting a long time to tell.”

Contrary to my usual opinionated self, I’m of two minds about “Hello I Must Be Going.” It’s a slow-paced movie, and at times, too slow. The decision Amy makes about her immediate future at the end of the film is portrayed as progressive, although it can also be seen as regressive. Yet the fine actors, especially the emotive-faced Melanie Lynskey and the restrained Blythe Danner, elevate the film well beyond its story line.