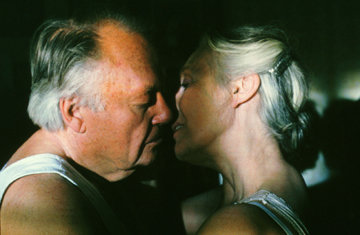 During the 1980’s Paul Cox was one of the players in the Australian film renaissance and he created a series of quirky, character-driven films like Lonely Hearts, Man of Flowers, and My First Wife. All had an idiosyncratic charm and a genuine sense of caring for the offbeat people and relationships portrayed. But aside from one IMAX documentary, Cox has gone over a decade without having his new films released in the United States. Until now, that is. Unfortunately, with Innocence, Cox may be relegated permanently to the outback.

His subject is love in the senior set. Not love between a long-married couple a la On Golden Pond, nor the induced randiness of the marginally condescending Cocoon. In Innocence, a couple who had a love affair in their youth reunite half a century later, fall in love all over again, and initiate an affair. He, Andreas (Charles Tingwell), is a widower and she, Claire (Julia Blake) is still with her husband of many years, in a marriage from which love and sex evaporated two decades before.

With ever-increasing life expectancies, there are more old people around now than at any time in history. Perhaps due to the youth-fixated values of our society, it was assumed for a long time that sex ceased for the aged and the subject was either a joke or simply ignored. In more recent years, it has become clear that sexual appetite and activity can continue with gratifying satisfaction into the 70’s, even the 80’s.

It’s a great idea for a movie to explore such a romance and Innocence gives the impression that Cox sat down and thought out all the issues that are bound to arise in the circumstances. What about the abandoned spouse? the sagging body parts? the imminence of the infirmities of age and death itself? And, of course, what will the children think? Then, instead of vesting the issues in the kind of individualized characters that Cox used to do so well, he comes up with a rather ordinary upper middle class couple–she, the suburban housewife; he, retired and occasionally playing the organ at the local church.

The relationship is romanticized, cutting back and forth between the youthful affair and the current liaison. When they first again bed, she asks him to close his eyes, about the only reference to the condition of the geriatric physique. The camera’s avoidance of their bodies seems dishonest, rather than tactful, a blatant avoidance of the very issues that have been raised. And Julia Blake is so beautiful an older woman, that, like Hollywood romances about the young, it’s hard to identify–those are film stars on the screen, not ordinary mortals. Surely not you and me.

Aside from the unimaginative approach, the film self-destructs with dialogue that would make a soap fan blush. "What really matters is love," says Andreas to his daughter, "Everything else is rubbish." "She wants to be needed,"says Claire’s husband, "That’s the way women are." And "Love becomes more real the closer it comes to death." and "I want to make it up to you, Claire." and "I’m suffering but you don’t care." and "I don’t understand women. Never have." and "I thought that happiness was living for other people."

Both Blake and Tingwell are charming performers, struggling to stay afloat in this bowl of porridge. Terry Norris, as Claire’s husband, John, plays on just one tiresomely predictable note of angry hurt. Had he been played (and written) with more shading and complexity, there might have been a more interesting conflict for Claire.

The field remains wide open for a movie about senior passion and love, one stripped of sentimentality and rooted in characters who did not originate in daytime television, but have some individuality and the kind of interesting quirkiness that Cox used to know how to do quite well. A good dialogue writer is essential.