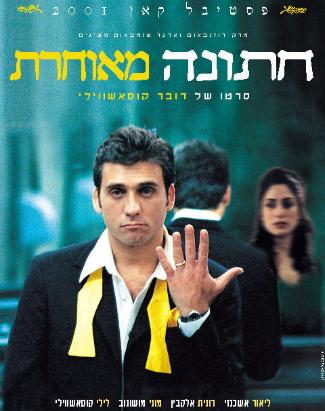 They’re marketing Late Marriage as a comedy, which isn’t quite fair. There aren’t many laughs in this interesting study of the cultural mores of Georgian Jews in Tel Aviv. There may be a touch of exaggeration in the characterizations, but they don’t really stretch into the black humor of satire; aided by good performances, they’re quite believable as they are and the result is that there’s more pain here than drollery.

Zaza (Lior Ashkenazi) is working on his doctorate in philosophy. He’s goodlooking and, according to the standards of his family and their peers, he is shockingly unmarried at the age of 31. In a generation gap as wide as the Grand Canyon, Zaza’s parents still subscribe to arranged marriages and they employ the services of a matchmaker. There have been dozens of attempts before the film starts and one meeting of both families along with the prospective bride and groom is shown here in detail. The girl is only seventeen, but she already has the jaded values of a younger generation; she wears a sexy dress, is interested in being a fashion designer, wants to marry for money–and she comes on to Zaza in her bedroom while the parents are negotiating in the living room.

The irony, of course, is clear: the parents pursue traditional values (no divorcees, no one older than the bridegroom, no one pregnant) according to a rigid rulebook, while they ignore the substance of character that might make a good working marriage.

The reason behind Zaza’s disinterest is soon revealed. He’s passionately in love with Judith (Ronit Elkabetz), a woman older than he (she’s 34) who is a divorcee with a young daughter. He knows she will be unacceptable to his parents, has kept the relationship secret, and resists her requests to meet his family. The film follows what happens to all of them when the family finds out. It is not pretty to see.

From the point of view of an outsider, the position of the parents is indefensible. Not only are they locked into arbitrary and superficial rules, but their own relationships seem to be characterized by bullying, passive aggression and guilt trips. Zaza’s father (Moni Moshonov) had an extramarital affair when he was younger and had a gun held to his head by his father-in-law to force him to give up "the whore." And his mother (Lili Kosashvili) seems to have wanted his father back only so that she would not have to assume the abhorred position of divorcee.

Religion seems to play little role here. On the contrary, the matchmaker still deals in love talismans and Judith casts a mystical spell all her own. There is a subtext about the lines between religious belief and superstition, but it is not pursued in any great depth and does not seem to relate directly to the business at hand.

Zaza, the educated and charming center of the action, may also be the weak point of the film. He is utterly passive before his parents, not even attempting to reason with them, merely going his own way. At the showdown, he’s a letdown–his behavior seems cowardly. It’s hard to reconcile what he does with his demonstrated passion and presumed intelligence. He earns his fate, which may well be paralleled in similar real life situations, but it would have been more gratifying to see him put up a real fight. Instead he becomes only pathetic.

It’s Zaza’s mother who, despite her rigidity, manages to learn something from all the conflict and she gets things into a realistic perspective in the end. But it doesn’t change a thing. It’s a minor solace in a depressing scenario.