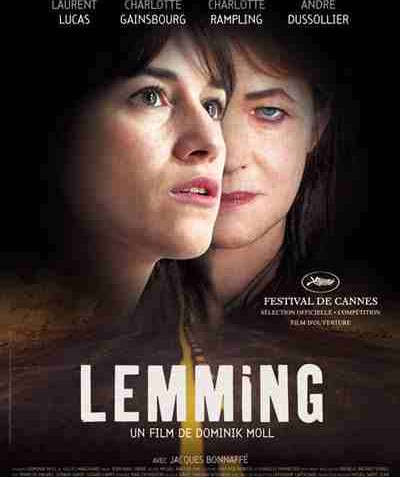 Dominik Moll&#146;s latest project is a transparently formal film that plays along the narrative boundary between the psychological and the supernatural. Like a surrealist&#146;s representation of dream space, Lemming is visually very clear, while its narrative erupts into moments of irrationality. In pragmatic English, Lemming is a Hitchcockian exploration of sexual desire and infidelity, examining what it means when "the body says yes, but the head says no."

Young and successful home automation engineer Alain Getty (Laurent Lucas) has been settling into his new home with his "model" wife Benedict (Charlotte Gainsbourg). At work he is tinkering with a remote camera eye that flies and hovers like a helicopter. A thoroughly modern Frenchman, Alain is disarmingly naive in his faith in the rational world. His devotion to control, mirrored not just in his career and work project, but also stylistically in the sleek, white lines of his ultramodern house, neighborhood, and laboratory, almost begs to be violated, or, as the French might say, for the irrational to erupt into his model life. It turns up one evening, symbolically, in the form of a curious red herring &#150; his kitchen drain has been plugged up by what proves to be a lemming. This is odd, as lemmings are native to northernmost Scandinavia and are unknown in France. Odder still, this one comes back to life.

At the center of the story is a game of supernatural menage a trois, among Alain and Benedict, Alain&#146;s boss Richard Pollock (Andre Dussollier) and his shrewish wife Alice (Charlotte Rampling). Arriving very late for their first dinner as guests of Alain and Benedicte, Alice appears sullen and discomfited; she unleashes a torrent of verbal abuse on her husband, who has, yet again, been discovered "sleeping with whores." Like the symbolic, yet real rat in Truly, Madly, Deeply, the arrival of the lemming signals the ghost in the machine of the Gettys&#146; marriage. Dreams, blackouts, jump cuts, and non sequitorious personality shifts quickly pull the audience in, begging the suspension of disbelief. Loss of control and descent into frenzy or only a treacherous appearance of chaos?

Lemming contains wonderful cinematic touches and seems custom designed for the serious movie lover. A romantic mountain cabin conjures otherworldly escape. A cloud-swathed Alpine peak embodies the nightmare (the Alps once connoted "nightmare," now by extension "the subconscious"). The aging modernist architecture of most of the sets echoes Truffault&#146;s vision in Fahrenheit 451. Similarly, both Richard and Alice manifest oddly manipulated behaviors &#150; beyond the logic of dream, the pull of some invisible supernatural force seems to be controlling them. Only Alain seems to escape it directly, but he becomes something of a running joke for the film when, as in Nathaniel West&#146;s novel A Cool Million, he is broken and beaten down, limb by limb, scene by scene.

Charlotte Rampling delivers a thoroughly credible, at times shocking performance, as a madwoman who did not end up in the attic. Andre Dussollier achieves a fine-tuned balance, between the charisma of a successful haute-bourgeois businessman used to getting his way and the hen-pecked husband who no longer feels guilty for what his behavior has done to his wife. Charlotte Gainsbourg charms as the ideal young bride, anticipating her husband’s whims, compliant, sexually desirable and desirous of pleasing her husband by being sexually aggressive/"frisky" — her husband’s own private whore/Madonna. And Laurent Lucas never waivers, as he is stripped, step by step, of dignity and his clothes, steadfastly very much the model husband he believes himself to be. Who&#146;s Afraid of Virginia Woolf partners up with one hell of a shaggy dog in Lemming.