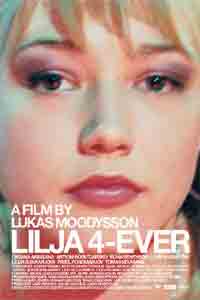 Bring a hankie to Lilya 4-Ever, and be prepared to leave the theater with a heavy, aching heart. Swedish director/writer Lukas Moodysson&#146;s brutal story of a teen girl betrayed by her family and society is difficult to watch, but it&#146;s also one of the most gut-busting, unforgettable and, yes, poetic, films to hit the big screen in a long time.

In the first 15 minutes, 16-year-old Lilya (Oksana Akinshina), who lives in a dreary, unidentified city in the former Soviet Union, is abandoned by her mother, who is moving to America. Lilya runs after her, shrieking "don&#146;t leave me!" but ends up writhing in spattered mud left in the wake of mom&#146;s boyfriend&#146;s car as it chugs away.

Things don&#146;t improve for Lilya. Her hag of an aunt relocates her from her small, crummy apartment to an even smaller, despicably filthy flat still filled with detritus from a recently deceased old man. It&#146;s not long before the electricity is cut off. She lights candles; she&#146;s freezing cold. Even the clerks in the bare-shelved store give Lilya and her friends a hard time about their purchases. To pass the time, Lilya and her pals sniff glue, and fantasize. She carves "Lilya 4-Ever" on a bench on the street.

The pretty Lilya and her friend Natasha (Elina Benninson) decide to make money by prostituting themselves. They get decked out in their sexiest clothes and go to a disco, where Natasha picks up a guy, while Lilya passes. When Natasha&#146;s father finds the cash she earned, she lies, and exposes Lilya as the loose one. Lilya is not only ostracized by her so-called "friends," she&#146;s raped.

The one positive thing in Lilya&#146;s life is Volodya (Artiom Bogucharskij), a boy several years younger than Lilya who sublimates his crush on her, and who becomes her true friend. A scene when they escape to an abandoned military base and dream about basketball and better lives as they huddle under a blanket to keep warm is powerfully emotional. Brilliantly falling just a shade short of being unbearable to watch, it&#146;s riveting.

What makes Lilya so compelling is her faith, which she keeps even while she&#146;s lost just about everything else. Her most prized possession is a picture of an angel, an image director Moodysson repeatedly employs in magical realism sequences that give the viewer a break from Lilya&#146;s relentlessly oppressive life. That same faith is what drives the movie. Moodysson delicately crafts a compellingly sympathetic protagonist in the face of such harsh reality. Even though there&#146;s intellectual understanding that nothing good can ever come in Lilya&#146;s life, Moodysson so transfixes his viewers, there is no choice other than to root for her.

Moodysson, who explored lives of teens in 2000&#146;s Together (a decidedly lighter film than Lilya), elicits nuanced performances from his young actors. As Lilya, the beautiful Akinshina (who looks a little like Michelle Williams of TV&#146;s "Dawson&#146;s Creek") never overplays, while Bogucharskij is sweetly and gently matter-of-fact as Volodya. Volodya, of course, is right when he warns Lilya that her hunky newfound boyfriend Andrei (Pavel Ponomarev) isn&#146;t the nice guy he seems. Andrei picks her up in the disco where she&#146;s become a regular, eventually having been forced into selling herself.

But Andrei doesn&#146;t sleep with her. They drive around in his red sports car, have innocent fun at a bumper car ride, and he treats her to McDonald&#146;s. (Moodysson&#146;s use of the corporate behemoth as happy foreshadowing before terror to come is pointedly ironic.) Andrei tells Lilya that they&#146;ll move to Sweden, where he&#146;ll get her a job. Lilya does go to Sweden, where horrors even more violent than what she experienced at home are in store for her. Moodysson even has us wishing that she&#146;ll return to her own dirty town.

The film, mostly a flashback, comes full circle to an image of a beaten girl who&#146;s searching, running uncontrollably through city streets to the pounding, anguished strains of Rammstein&#146;s "Mein Herz Brennt." About to jump off a pedestrian bridge into traffic, she&#146;s wasted, and so is the audience.

In Lilya 4-Ever, Moodysson has created a rare work of art — one with an intensity that evokes physical as well as emotional pain, and overwhelming compassion, too.