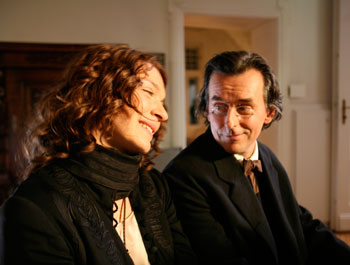 When is a film’s subject matter so compelling that it trumps the hyperventilated script and some-okay, many-implausible scenes?

When that film is Percy and Felix Adlon’s “Mahler on the Couch,” a biopic about the great composer/conductor’s stormy marriage to Alma Schindler, possibly the 20th century’s foremost femme fatale. As Tom Lehrer’s song “Alma” puts it:

“Her lovers were many and varied,
From the time she began her beguine.
There were three famous ones whom she married,
And God knows how many between.”

Obviously it’s easy to get seduced by Alma, but we were talking about Mahler and the couch. In 1910, distressed at the discovery that Alma was having an affair with Gropius, Mahler sought the help of Sigmund Freud, whom he finally (after canceling several appointments) saw for four hours in the Dutch city of Leiden, where Freud was vacationing.

Nobody knows what really transpired, or if Freud even got the composer to lie down on a couch. Mahler died less than a year later.

In the film, Mahler (Johannes Silberschneider) and Freud (Karl Markovics) spend the night wandering about Leiden, after which Mahler does indeed get on a couch-actually a cot-in Freud’s hotel room. Their sessions are interspersed with flashbacks from Mahler and Alma’s courtship and tempestuous marriage. Mahler and Freud part on a first-name basis; the notion that the dignified Freud, a bourgeois Viennese through and through, would ever have encouraged a patient to call him “Sigi” is risible.

That’s not the only unintentionally humorous scene in this very sober movie. Although our forbears-at least if they were passionate Mittel-Europäischer intellectuals, who chatted about Nietzsche at their soirées-tended to be more flowery in their talk and correspondence than we ironists are a hundred years later, it still makes one squirm to hear lines such as Alma’s “I was tortured in your purgatory-and what did I get in return?” Or, “You are my god-I am in your music.” (That’s after she’s begun the affair with Gropius.) Or, in high spirits after a successful bout of composition, as Mahler says to Alma, “Get the kids. I’ll play you my Sixth.” (Part of the problem here may be with the subtitles.)

Mahler, 19 years Alma’s senior, made it a condition of their marriage that she give up her own work as a composer, which the 22-year-old Alma (Barbara Romaner) first accepted and then bitterly resented. It’s easy to empathize with Alma’s rage-she’s well portrayed by Barbara Romaner, a relative unknown. Johannes Silberschneider’s Mahler is convincing too, although the actor resembles Dustin Hoffman more than he does the actual Mahler. Several characters, including Alma’s mother and Mahler’s sister, appear as commentators on the action.

The script and directing chores were shared by Percy Adlon (“Bagdad Café”) and his son Felix, so it’s hard to know where to place the credit and/or blame. The settings-Vienna, including the opera house and several fine Secession residences-the Dolomites (an improbable glacier scene!), and Leiden-provide verisimilitude and visual interest.

But no film about Gustav Mahler would be complete without his music, and here “Mahler on the Couch” excels. Almost all the background music is Mahler’s, conducted by Esa-Pekka Salonen, and it’s splendid.

Part tragedy with hints of comedy, but mostly melodrama, “Mahler on the Couch” offers a fascinating portrait of its time and place through the lives of three of its major players. It’s the opening night film of “German Gems: A Weekend of New German Cinema,” playing at San Francisco’s Castro Theater January 14th to 16th (with three films, including “Mahler,” showing in Point Arena on January 22nd).