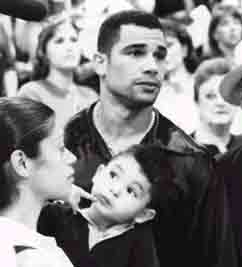 Manito pulsates with the beat of salsa, vibrates with the charged energy of Puerto Rican New York City. Director Eric Eason debuts with the confidence of a pro as he tells the story of a second-generation immigrant family struggling to gain a rung up on the economic ladder, even as they cope with poverty, drugs and crime. It’s a classic story that follows in the mode of others (Italians, Irish) who came to New York looking for streets paved with gold, often finding blood and tears slicking the way.

The film takes place within a two day period, centered on the graduation from high school of its eponymous character. Manito (Leo Minaya) is the joy of his family, the likable youth who will reach the next rung, heading off for Syracuse with a full scholarship. The family’s abundant pride in his accomplishment spills over in the toasts at the graduation party that his older brother, Junior (Franky G.), throws for him. But lurking in the background is their father, Oscar (Manuel Cabral), a former drug dealer, now owner of a deli. Oscar had used Junior in his drug operation some years before. Junior got caught in a sting, took the rap without talking, and served time in prison. His father never once visited him in prison, leaving them bitterly alienated.

But Junior is no role model either. Struggling to make a go of a painting contacting business, he forges required insurance documents, picks up inexperienced workers in the street labor market, lies to his client, and then bangs her while the painters are working in another room. Junior’s a bull in heat, with no compunction about sleeping around, heedless of the beautiful and loving wife and small son he has at home.

A series of circumstances lead to a crucial turning point in the life of this family. Eason, amply assisted by strong performances, creates such fully realized characters in the two brothers that, even with Junior’s flaws, they are sympathetic. Viewers’ hopes for them are buoyed by Manito’s success and the happiness it brings to his family, all the more to anguish when harsh realities confront them.

Hand-held cameras and jumpy editing give an added pulse to the energy of Manito, sometimes more so than necessary. Minor characters provide colorful background, such as the brothers’ courtly grandfather, all dressed up and sporting a boater as he peddles underwear at a local whorehouse. Eason doesn’t pad his film; he brings it in at some 75 minutes, stopping when the message has been delivered. There are countless current directors with many times the experience who could take a lesson from that kind of discipline.

Zeroing in on one family and adeptly developing character even as he tells a focused and well-plotted story, Eason delivers the emotional power that Scorsese missed in the overblown Gangs of New York. Manito packs a visceral punch; it grabs hold and doesn’t let go.