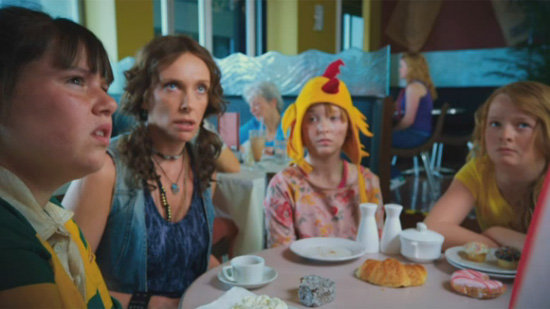 Director PJ Hogan delivers his latest film, “Mental”, with the same off-beat yet thoroughly entertaining sensibilities that he did with his head-turning debut project, “Muriel’s Wedding.” For “Mental,” think “Muriel’s Wedding” meets “Edward Scissorhands,” with a set as colorful as a Pedro Almodóvar movie. Another Australian-based comedy, “Mental” centers on Shirley, a kind-hearted, happy-go-lucky, yet troubled housewife and mother. In an effort to cope with her cheating and insensitive husband, as well as the disdain of her five daughters, Shirley reverts to hiding in the world of music, especially singing the entire soundtrack of “The Sound of Music”. To the great embarrassment of her children and the disapproval of her husband, Shirley’s homage to the Family Von Trapp is usually on public display for the judgmental neighbors.

When her coping mechanism becomes too much for her husband Barry, Shirley is committed to an institution and he is left with the children he seemingly doesn’t know or care for. He quickly solicits the help of an eccentric hitchhiker named Shaz, played wonderfully by Toni Collette. Shaz is the odd, outspoken hitchhiker with a heart of gold who clearly knows nothing about being a nanny, but manages to empathize and inspire. She becomes the bridge between a misunderstood Shirley and her family, and Shirley’s key to vindication and freedom.

Of course, Shaz is not entirely focused on the girls and their unfairly institutionalized mother and absent father. She too is not without her own issues that include questionable ties to the owner of local shark exhibit, a questionable character himself. This easily irritated owner is surprisingly played by Liev Schrieber, who has a convincing Aussie accent and an even more convincing grasp of broad humor. Everyone’s issues are highlighted and collide, with some relationship resolutions and even a change of heart from Barry. Along the way, there are some laughs.

“Mental” has many elements of “Muriel’s Wedding” but in a different setting and a lighter touch. Instead of comfort through the music of Abba, it’s Julie Andrews and the Von Trapp Family. Instead of the main character needing validation through marriage like Muriel did, it’s Shirley’s need for validation as a good wife and mother despite her oddities. Here, too, Hogan attempts a balancing act between outlandish humor, quirky characters, and serious matters of the heart. While he has the quirkiness and humor solidified, the drama is not as pointed and poignant as it was in “Muriel’s Wedding”. That said, the character of Shirley, played by Rebecca Gibney, garners sympathy from viewers not unlike Muriel’s misunderstood and overlooked mother. Gibney and Collette bring delight to this comedy with a musical twist.