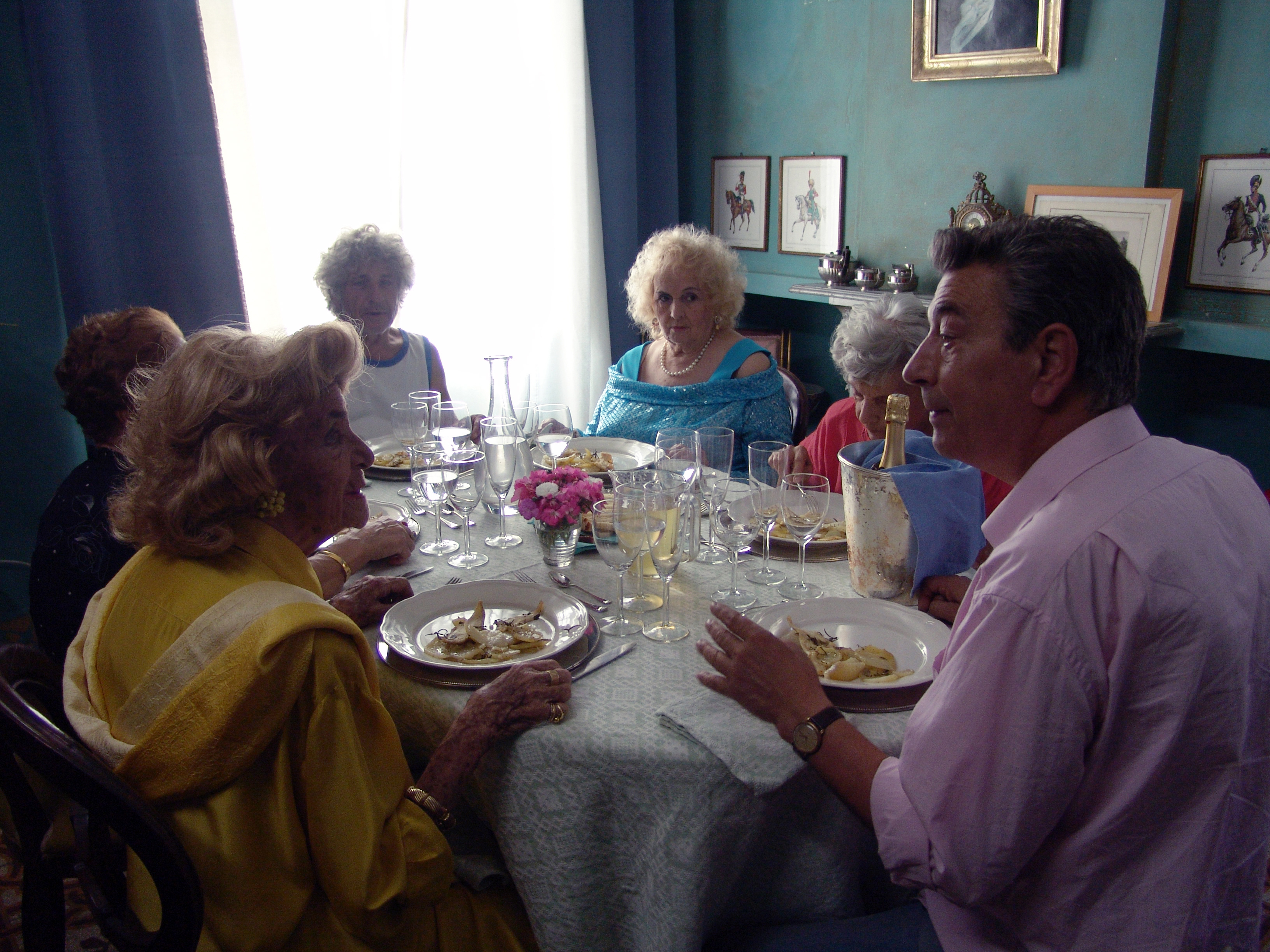 With the very rainy weather we have been having here in the San Francisco Bay Area, I was happy to spend some time in sunny Italy, thanks to the movie Mid-August Lunch.
This comedic movie depicts a middle-aged man (Gianni Di Gregorio, also the writer and director) who lives in Rome with his elderly mother (Valeria De Franciscis). Through a series of amusing circumstances, which I won’t spoil, he ends up taking care of a houseful of elderly women over a holiday weekend.

At times, this movie both charmed me and made me uneasy. The elderly women in this movie (average age, 90) were portrayed as bratty children at some points during the film. They argued with each other over trivial matters. One even ran away. I am lucky enough to have a number of feisty older women in my life and they act nothing like the petty, shallow women in this movie did.

On the other hand, it is rare that older women have parts in films; I enjoyed the fact they were on the screen. As well, the film clearly shows that this son is devoted to his mother. That was generally true for all the sons and all the mothers in this movie. It was important to everyone that the older women were properly taken care of over the holiday weekend.

The writer and director Gianni Di Gregorio made an interesting choice to cast women who are not trained actors. The fact that these women do not act for a living showed up on the screen by giving the movie a feeling of spontaneity and realism. Conversations seemed real in that they rambled. Unlike in typical Hollywood movies, the character’s actions may not have had big dramatic consequences, but impacts were felt in smaller, more realistic ways.

The bright white summer light of Italy was also a star here. The director of photography, Gian Enrico Bianchi, used natural light throughout the movie. Light and shadow in the small Roman apartment were created by the opening of a window shutter or the closing of a door.

Food and wine were also a focus of the movie. Since everyone loves Italian food, this facet of the film is a highlight. The older women have many discussions about recipes as much red wine is drunk. This movie illustrated of love of life through a love of good food.

After seeing Mid-August Lunch, I was curious as to what holiday was being celebrated in the movie. After some research, I discovered there are two holidays celebrated in Italy in mid-August. Ferragosto is in today’s Italy a holiday in which Italians take brief vacations. That holiday often coincides with peak activity of the Perseid meteor shower. In addition, the feast day of the Assumption is also celebrated on August 15th.

I recommend this movie. A movie featuring older women could have been cloying or mocking. Mid-August Lunch manages to avoid both these extremes. Instead, the film creates an entertaining atmosphere with touches of realism. As a bonus, viewers are able to spend some time enjoying an Italian summer.