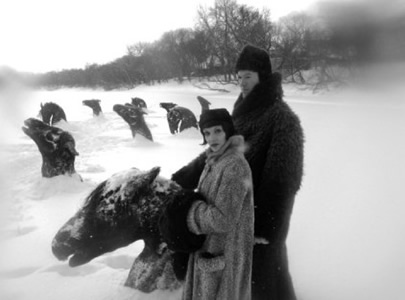 One thing you can say about a Guy Maddin film is that it couldn’t be anyone else’s. The Canadian filmmaker who specializes in appropriating the look of cinema past was doing this long before Todd Haynes came up with Far From Heaven, Peyton Reed with Down With Love, or even Peter Jackson with Forgotten Silver. His fictional autobiography, My Winnipeg sports Maddin’s signature grainy black and white like it was shot on 8 mm film, and some of it may well could have been. But beyond making homages to past styles, Maddin specializes in satirizing sexual repression, and he’s going full tilt on that theme here.

The film opens with an old woman being fed harsh lines into the camera about a sexual liaison. The woman turns out to be a fictional version of Maddin’s mother admonishing his sister. The mother is played by the aptly named Ann Savage, star of the 1945 cult classic noir Detour. Savage is hilarious and steals every scene she’s in.

The conceit is that Maddin (played by one of his regulars, Darcy Fehr) is finally leaving his real home and birth place, Winnipeg, Manitoba. He’s on a train, reliving his memories as he passes old buildings on the way out of town. In a facetious joke, Maddin says that as he is a filmmaker, he will have his mother reenact scenes from his childhood in the hopes of unlocking family secrets to free himself from the “heinous power of family and city.” He has actors play the roles of his siblings and a Pug dog has to replace his long-dead Chihuahua.

In his typical allusion to darkly comic psychological metaphors, Maddin recounts how his mother used to star on a television series in which she would have to talk her suicidal son off a window ledge every single show. He reminisces about how his home was the biggest house in the neighborhood as it also housed his mother’s business, a beauty salon that was home to a graying “gynocracy”.

All of this is told in an almost constant drone as we hear a near stream-of-conscious voice-over (by the real Maddin himself). He’ll ramble on about his mother’s lap, forks, arteries, animals, hunters, boatways, and sleepwalking all within two minutes. However, the voice-over is an intrusive, sometimes oppressive narration that refuses to let Maddin’s images do the talking. Maddin has already proven how capable he is at visual storytelling in “silent” films like Dracula – Pages from a Virgin’s Diary and Cowards Bend the Knee. On the other hand, everything in My Winnipeg relies on his verbally describing to us what is going on.

The comedy is hit or miss. A long segment devoted to Winnipeg’s psychic community falls flat as does the superhero-ish Citizen Girl (although actress Kate Yacula is like Wow!). Other ideas – the students at St. Mary’s School for Girls or the ancient hockey team who continues to play in a collapsing arena – are better in concept than execution. The comedy reaches its pinnacle when it returns to the opening scene. Mother Maddin scolds her daughter (Amy Stewart) for being a whore when her car hits a deer (a combination of the illogic there and the actors’ delivery is what makes this so funny). Other great moments include a vignette about the fate of 75-year old talking bird and horse heads frozen in the river (you have to be there).

The whole movie is virtually one long montage, and it at least feels like Maddin put more effort into this project than usual. But it also feels overdetermined and overly familiar as Maddin’s standard tropes have worn with each film. My Winnipeg isn’t as funny as some of his other films, and even at a meager 80 minutes, it feels a little long. Still, no one else out there makes movies like this, and it has enough highlights that Guy Maddin fans should still seek it out.