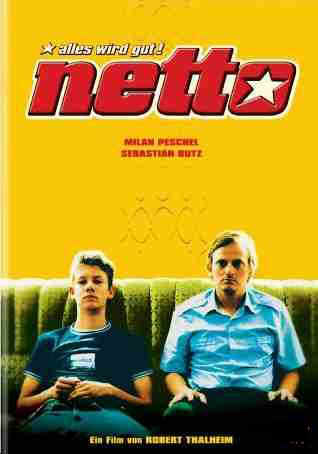 Film school graduate Robert Thalheim&#146;s first feature-length narrative film, Netto, casts a loving, yet not at all blind, eye on life in reunited Germany. Marcel (Milan Peschel), father, ex-husband and a former electronics repairman in the old East Berlin, has been left behind in the brave new capitalist world. His alcoholism has already cost him his marriage. One day, Marcel&#146;s fifteen-year-old son Sebastian (Sebastien Butz) turns up at dad&#146;s door. Sebastian has had enough of life with his mom (and Marcel&#146;s ex-wife, played by Christina Grosse), her affluent boyfriend, and their very western, relatively wealthy lifestyle. It seems the father-son bond is much deeper than either is willing to admit at first, and both share a contempt for the yuppie boyfriend (Bernd Lambrecht) with whom mom is about to have a child.

As a domestic portrait, Netto is warm and insightful. Peschel and Butz convey a genuine father-son affection in mundane, realistic details. Dad still lives in the past (witness his efforts to repair the disposable consumer electronics others have cast off), oblivious to basic professional protocols, whether how to write a resume or how to dress for an interview or how to network. Son Sebastian is all computer geek, and has a hard time trying to get to first base with would-be girlfriend (Stephanie Charlotte Kotz), with his passionate devotion to Star Wars and video-gaming minutiae. Soon Sebastian is mentoring his dad, attempting to gently steer him away from fantasy and toward real-world employment.

Dad has two passions. First, his employment fantasies entail working as an 007-level professional bodyguard. Second, Marcel is a diehard fan of 1970s country singer Peter Tschering, the "East German Johnny Cash," whose music serves as the film&#146;s soundtrack, moving the plot forward at several points.. Such elements of "East-Nostaglia" underscore Marcel&#146;s pathetic inability to make the transition to the new economy. He had become an alcoholic before the fall of the Wall and the tragedy Thalheim suggests is of the small, domestic sort. He deflates the Ost-nostalgie while sympathizing with those who have hung on to it for want of anything more comforting to buoy themselves up.

Netto is a comedy of manners. Named after the generic-style supermarket chain (a kind of European Wal-Mart food store) proliferating in the new Europe, Netto also evokes the honest, hard-working, hard-drinking blue-collar mentally of 1970s country music. As one American country song of the era had it, "work your fingers to the bone, what do you get? — bony fingers!" Thalheim achieves a perfect, satisfying balance, expressing the tensions and paradoxes of the new German society as embodied in this father and son, of a Berlin where Appalachia-style despair and confusion coexist only blocks from Manhattan luxury penthouse style ease and wealth.