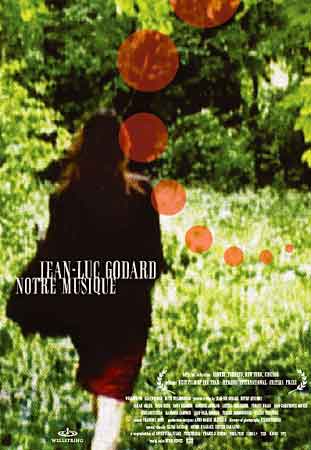 What’s most disarming about Jean-Luc Godard’s Notre Musique is its simplicity. After the puzzling opacity of his 1990s films and the intricate push-pull narrative of In Praise of Love, this triptych political essay seems almost too direct.

The film is divided into three sections Godard calls "kingdoms": Hell, Purgatory and Heaven. Hell opens the film with a fragmentary, allusive montage about violent death, cut so fast the images barely register, culled from documentary footage of recent wars and snippets of Hollywood battle scenes. Purgatory is a fiction set in Sarajevo. Though it’s peopled with real world literary figures and filmmakers playing themselves (the climax is a fascinating lecture by Godard on the philosophic and political ramifications of shot/reverse shot editing), there’s also a trio of allegorical Native Americans straight out of the loonier diatribe skits in Sympathy for the Devil. Heaven concludes the film with a lush pastoral fantasia.

It adds up to the portable Godard, volume two, mixing and matching the styles he’s experimented with since he abandoned the nouvelle vague for Mao’s cultural revolution in 1968. Hell’s shards of provocative found imagery echo the 1998 Histoires du cinema; Purgatory mixes the sublime calm of Passion with the bumbling street theater of his Dziga Vertov group years; Heaven’s forest and river evoke the final third of Weekend. There’s none of the loony exuberance of his films with Karina and Belmondo: this is Godard as grave, brooding Cassandra, musing on the impossibility of political solutions in images as rapturous as they are stark. (The film is worth seeing for the clear, heavy light of the exteriors alone. For years, he has been reducing his images to ever purer distillations of light and color, so that now even the most commonplace moments have a ravishingly sensual weight.)

Notre Musique is the rueful work of a man who once fell hard for simplistic, murderous politics and has come to see his mistake. Godard’s first political films (Wind From the East, British Sounds, Sympathy for the Devil) are frustrating largely because of their narrow-mindedness. For all his rhetoric of "returning to zero" and the drive to fundamentally question the relationship of sound and image in cinema, the films of his Maoist period replace his intellectual curiosity with the smug didacticism of someone who knows all the answers. (There’s a wonderful moment in Denys Arcand’s otherwise flaccid The Barbarian Invasions in which the dying Remy reminisces about how, besotted with Godard, he once tried to impress a Chinese woman by rhapsodizing about Mao. The woman, who lost her parents to the cultural revolution, was less than impressed.)

The closest Notre Musique comes to sloganeering is the occasional aphorism on violence dropped into the dialogue: "Humane people don’t start revolutions, they start libraries"; "Killing a man to defend an idea isn’t defending an idea, it’s killing a man." The sole success claimed for communism here is Hungary’s defeat of England at soccer. This is hesitant inquiry, not propaganda, and it insists only on the fact that certain conflicts are irresolvable. Sarajevo itself becomes a metaphor for political exile and displacement, a means of exploring Palestine and Israel far enough from the gunfire for critical distance. Jews and Muslims have their say and consider their options, only to return to the fray.

The film offers only the bleakest possible responses to the questions it raises. Asked by a student if consumer video cameras will save the cinema, Godard cuts to himself, bathed in shadows, visibly discomfited, for a deeply uncomfortable, silent minute. Suicide is presented as both "the only truly serious philosophic question" and the only fitting end for a troubled character. What peace Notre Musique offers comes at its end, in Heaven: a fenced in paradise, guarded by American Marines.

(9613)
$4.50 (as of January 21, 2021 - More infoProduct prices and availability are accurate as of the date/time indicated and are subject to change. Any price and availability information displayed on [relevant Amazon Site(s), as applicable] at the time of purchase will apply to the purchase of this product.)
related posts