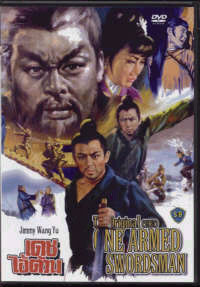 One-Armed Swordsman is a prime choice for The Film Society of Lincoln Center&#146;s "Heroic Grace: The Chinese Martial Arts Film" series. The movie is one of the essential classics of Hong Kong cinema, and its director Chang Cheh (Super Ninjas, Five Deadly Venoms) lorded over Chinese martial arts movies in the 60s and 70s. At the time, his films were only matched in acclaim by those of King Hu (Come Drink with Me, A Touch of Zen) and in popularity by those of Bruce Lee (Return of the Dragon, Enter the Dragon).

One-Armed Swordsman opens in dramatic fashion with an assault on a martial arts school and after that, it never lets the viewer go. The kindly Qi Ru-Feng runs the school under attack, but he is saved by his student, Fang Cheng, at the cost of Fang&#146;s own life. To repay his debt, Qi raises Fang&#146;s orphaned son, Fang Gang (Jimmy Wang Yu in the role that made his career) and trains him into a masterful disciple. Qi&#146;s spoiled and flirtatious daughter, Pei (Chiao Chiao), taunts Fang because he will not play her games, and in a half-accident, half-intentional incident, Pei slices off Fang&#146;s right arm. Bleeding profusely, Fang plummets off a bridge, and Master Qi, believing Fang has drowned, laments his death. But Fang actually fell into the boat of Hsiao Man, a farm girl who herself was orphaned long ago. She restores Fang to health while falling in love with him. Seeing martial arts as responsible for the death of her father, she loathes that world, but because Fang is so dispirited at being a cripple, she gives him her father&#146;s martial arts manual which just happens to emphasize left-handed techniques (all the more odd since left-handedness in Chinese culture is seen as highly undesirable).

Meantime, Qi&#146;s 56th birthday is coming up, and his long-time enemy, Long-Armed Devil, plots to destroy him and his students. Devil has invented a special weapon that counters Qi&#146;s martial arts style by locking up his sword. Devil and his men gradually ambush and kill off each of Qi&#146;s students journeying to his birthday celebration. As Fang inadvertently learns of Devil&#146;s plot, he has to struggle with his promise to Hsiao Man to stay out of the affairs of the martial world or to try to save his former sifu.

Whether director Chang was familiar with his contemporary Sergio Leone (The Good, The Bad, and the Ugly) or not, One-Armed Swordsman has the dramatic feel of the Italian filmmaker. Like Leone, Chang makes full use of the widescreen in composing the action. He also maintains a strong pace with a gift for efficient narration typical of Akira Kurosawa (The Seven Samurai). Written by the prolific Ni Kuang (who later wrote Bruce Lee&#146;s two breakthrough features, The Big Boss and The Chinese Connection), the movie weaves its various storylines together with mounting excitement. For almost the entire movie, Long-Armed Devil is seen only from the back. And what will Pei&#146;s response to Fang be when they finally meet again? Can Fang leave behind his violent past and join Hsiao Man as a farmer? It all comes together with the force of myth.

One-Armed Swordsman lacks the fluid choreography of a Yuen Woo Ping (Crouching Tiger, Hidden Dragon) or Ching Siu-Tung (Swordsman II), but it doesn&#146;t matter because the action scenes are underscored by strong characterizations; the cool moves are secondary. Some music is lifted from Mussorgsky&#146;s Pictures at an Exhibition and Stravinsky&#146;s Rite of Spring with surprising effectiveness. Wang Fu-Ling&#146;s original music has that groovy 60s feel to it, but doesn&#146;t seem dated.

By today&#146;s standards, the story might be fairly predictable, but this is a movie that helped make the archetype so popular. What is unusual and remarkable is that a wuxia pian (swordplay movie) creates such a strong ambivalence between upholding honor and contributing to a violent world where life is a cheap commodity. Its final resolution however predictable remains startling.