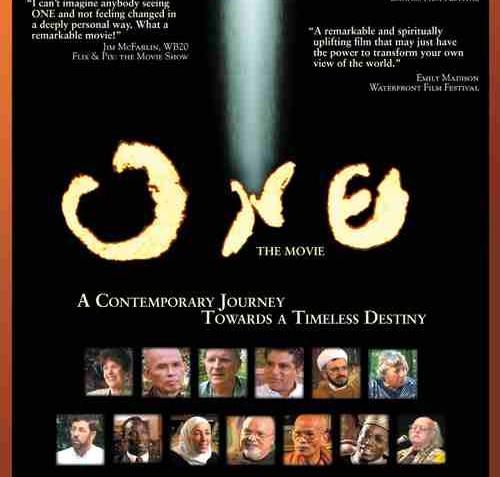 Ward Powers is a middle-aged, middle-class, married white guy in Michigan, a practicing attorney with a markedly creative bent. When he woke up from a dream in the middle of the night in the spring of 2002, he also realized he had a calling. Powers called a couple of close friends the next day to share his vision of a movie exploring the interconnectedness of all humanity. What began as an idea to make a small, amateur film of interviews with everyday people across the U.S. rapidly became a phenomenal two-year life-changing journey for Powers. As word of the film project spread, spiritual leaders around the world and from every wisdom tradition responded positively, even stepped forward on their own to offer to contribute to the project. Professionals with technical expertise donated talent, time, and resources, to assure the highest quality film, which has resulted in the mostly professional quality 35mm print release of One … The Movie.

Powers and crew recorded hundreds of interviews with everyday people and renowned religious and spiritual lights alike. Each individual was asked to respond on camera to the same set of prepared questions, about the ultimate meaning of life. As more "big names" stepped forward, the film project changed substantially, and the making of the film itself became part of the subject of the documentary, demonstrating a core spiritual truth the film arrives at, that the journey is the goal. Powers builds montages, here a series of responses to a question for one montage, there a series of asides which demonstrate a core theme. Most notably, Powers follows one aside in particular, the frequent observation that fear plays a primary role in shaping spiritual belief and in compelling humans to seek faith, and develops this into a core montage and theme.

The narrative structure of the film grows more complex, as the film makers organize their findings. Powers attempts a framing device (filmed in black-and-white), creating a fictitious archetypal Everyman, who wakes up in a cheap motel room, hearing the litany of the horrors of the world from a daily radio news broadcast. He arises and goes out into the world. The archetype is filmed in black-and-white, but transforms into color whenever he enters the real world, and the film shifts from a narrative "once upon a time" to the "now, the living present" which the film is documenting. Key interviews are also broken up into cliff-hanging episodes. Powers organizes all of his material to hone in on the lessons being learned experientially, as manifestly self-evident spiritual truths.

In the tradition exemplified by Joseph Campbell, the fundamental commonalities of widely divergent spiritual traditions find their deepest truths confirmed in their shared beliefs &#150; dualistic thinking arises from and leads to ignorance, fear arises from this resultant sense of separation between self and other. Much of the world&#146;s ills, in fact humankind&#146;s race toward planetary self-destruction can be understood as caused by this spiritual ignorance. Powers contrasts the convergence interviewees with conservative fundamentalist voices from "traditional" monotheistic religionists &#150; even as the multiple views converge on the note of oneness and commonality with all other human manifestation, the inflexible, orthodox dogmas stand in stark relief. As interviewee Sister Eveline observes, spiritual "growth entails healing." And the world, now in its most destructive phase in recorded history, would seem to recognize a need for healing, on a global scale. Or so Powers and many international spiritual leaders hope the world will recognize.