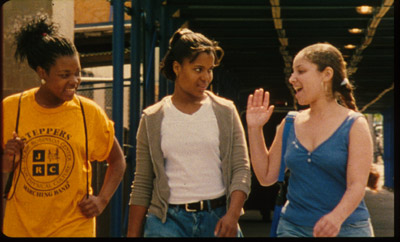 The best thing about Our Song, a new film from Jim McKay (Girls Town), is Kerry Washington, a luminous young actress whose tears must spring from pools in the depths of her heart. Washington plays Lanisha, an asthmatic inner-city high school teenager, at that stage of growing up when life’s harsh realities challenge youthful idealism and the mutability of friendships is painfully learned.

Her friends are Maria (Melissa Martinez) and Joycelyn (Anna Simpson). Maria works in a bakery, bringing home her earnings to help her harassed and impatient mother make ends meet; her father is in jail. Maria is pregnant by Terrell who has been avoiding her. In a subway conversation, she tells him that she doesn’t want to get married, but "Will you be around to help me out?" "I’ll be around," he says reluctantly, as he escapes back into the music in his earphones. Not very reassuring. Maria also has had a toothache for four months, but hasn’t been to a dentist.

Joycelyn, a less fully developed character than the others, works in a boutique and has ambitions to open a shop of her own–that is, if her singing career doesn’t work out. Her mother, on her way out to party, urges Joycelyn not to stay out all night. Joycelyn is edging away from Lanisha and Maria, moving towards new friends more in keeping with her ambitions. All three are members of the school marching band (a real such band is used for the film), a bright and brassy, swinging group of young musicians who work hard under the strict discipline of their director.

Lanisha’s parents are loving and supportive, even if her Dad’s working two shifts means he may not always be able to be there for her. The girls learn that their school will close because of asbestos problems and choices need to be made about the future. McKay takes his time with this material, giving his characters a chance to breathe as he fills in the details of their lives.

Therein lies both the strength and the weakness of the film. McKay’s sense of the telling incident is strong whether it’s Joycelyn’s mother disparaging her ambition to be a Miss Universe or both of Letitia’s parents showing up for the parade or Letitia confronting a three hour wait on line to register for school. Maria’s interview at the clinic is especially revealing, if an obvious expositional ploy–asked what she wants to do with her life, she doesn’t have much of an answer because she hasn’t ever had the guidance or the chance to focus on goals.

These moments do add up, but at a price for the effectiveness of the film; it starts to seem awfully schematic. McKay almost seems to have had a checklist–these are the points needed to be covered about inner-city life: drugs, pregnancy, single mothers, absent parents, neglected health, school bureaucracy, and so on. While Maria’s pregnancy is the strongest plot element in the movie, it doesn’t have the dramatic thrust to drive the action forward. When the pace slows, McKay cuts in another clip of the marching band, providing a high energy jolt to the generally low-keyed proceedings.

Still, it would take a heart of stone not to respond to these characters, sympathetically written and sincerely acted. McKay is a director to watch.