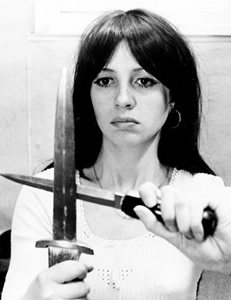 Like any other art or craft, cinema has its share of obsessive aesthetes. Among these cinephiles, there exist certain rare objects of legend that only the most devout pursue. Think Edward Yang’s A Brighter Summer Day or Bela Tarr’s Satantango are hard to find on the big screen? They’ve got nothing on Jacques Rivette’s 1971 Out 1 (aka Noli Me Tangere), which former Village Voice editor and critic Dennis Lim calls the Holy Grail of elusive cinema. What makes it so hard to see? First of all, it is 12 hours 23 minutes long. Second, currently only a single 16-mm print exists of the movie. Third, that print lacks English subtitles. That makes its presentation logistically difficult in the best of circumstances.

Well, Out 1 has emerged at New York’s Museum of the Moving Image as part of its Jacques Rivette retrospective. It features some extremely rare but great gems like L’Amour fou and Le Pont du Nord, but to say Out 1 is the attention getter is like pointing out Cary Grant in a lineup filled with Ralph Bellamy’s. Thirty-five years after being made, Out 1 is getting its first ever public screening in the United States on December 9 and 10. The museum’s staff reports that some people are actually flying in from around the country just to see it. It’s being presented with projected English subtitles by some hardy folks taking turns at a computer, prompting each line of dialogue as it’s uttered in French on the screen. This critic is happy to report that the print, struck in 1990, is in relatively good shape. While there are some scratches and the color is slightly muted, the contrast and resolution are still strong.

Out 1 is about two different theater troupes trying to put on plays by Aeschylus. Lili (Michèle Moretti, Wild Reeds) leads the more playful troupe staging “Seven Against Thebes” with elements of modern dance, most ably performed by the sexy Marie (Hermine Karagheuz, Duelle). Thomas (Michael Lonsdale, Munich) heads the more rigorous troupe working on “Prometheus Bound.” In two other parallel stories, deaf mute Colin (Jean-Pierre Léaud, The 400 Blows) panhandles by annoying people at cafés with his harmonica until they pay up and Frédérique (Juliet Berto, Céline and Julie Go Boating) struggles to survive as a petty grifter. Through mysterious notes, Colin goes on a quest to uncover a secret society known as The Thirteen and falls for haughty Pauline (Bulle Ogier, The Discreet Charm of the Bourgeoisie) in the process. Gradually, the characters begin crossing paths and past relationships flesh out.

Out 1 is broken up into eight episodes running between 70 and 105 minutes. Each opens with a recapitulation of the previous episode in black and white stills, often funny in a deadpan sort of way, and ends with its own closing credits. However, these episodes don’t work by themselves in any narrative arc or have any closure. They simply stop at some almost arbitrary point. Some could argue however that that describes the film as a whole too.

The utterly captivating acting exercises by the troupes amount to the film’s action scenes, and Rivette lets them play out in astounding stretches of 10, 20, or 30 minutes. These sequences have nothing to do with storytelling and everything to do with unadulterated experience. The first acting exercise in the film is also the most intense. It begins like a meditation, then transforms into primitive grunting, then writhing on the floor, then primal screaming, and so on. Rivette lets it go on for over half an hour, much of it in a single take, and it derives its power from the length. At the beginning, the people look like wackos, but by the end, you feel like you’re one of them, having gone through the emotional-roller-coaster-ride-of-an-exercise yourself. Words can’t quite do the experience justice. Then in a masterstroke, Rivette goes from all-instinct to all-intellect as the actors sit down to calmly analyze how the exercise functioned and whether it helped them.

These acting exercises go on memorably. Elaine (Karen Puig) leads her troupe in a symphony made up of shouts and screams. Thomas’ troupe manhandles Bergamotte (Bernadette Onfroy), who pretends to be unconscious throughout. This isn’t to say there aren’t other memorable set pieces. Léaud’s interaction with a Balzac scholar played by Rivette’s fellow French New Waver, Eric Rohmer, may be the funniest scene in the whole movie.

The film is about many things. Coming out on the heels of the 1960s, a time of idealism and then idealism dashed, Out 1 is tinged with nostalgia but also hope. Related to that, Out 1 is also about community and comraderie and trust. All the characters seek these to some extent, and when trust is destroyed, the results are devastating. At the forefront however, the film is about acting. Rivette and Suzanne Schiffman drew up an outline for the project, but essentially the actors improvised all the dialogue. So the actors play actors doing improv acting exercises, then they improv an analysis of their improv while in character. Even the actors who don’t play actors, Jean-Pierre Léaud and Juliet Berto, create roles for themselves to mislead others. Cutting between the acting troupes and the more narrative-driven strands of Colin and Frédérique heightens the awareness between levels of fiction and reality and how complicated these can be. How much do we adopt different personas for different people or masquerade our feelings for etiquette? How much of life is role-playing or elaborate games in which we immerse ourselves to provide a sense of purpose? Out 1 also captures something of what it means to have a creative and artistic personality, the kind that needs to exhibit total focus and lack inhibition.

While the quality of the performances vary, noteworthy is that out of seventeen primary roles, every actor comes off as capable. Léaud is engaging as comic relief. Berto’s gamine beauty and a general awkwardness her character seems to have with just existing in this world is a riveting combination. The physical loveliness, grace, and general carriage of Hermine Karagheuz and Françoise Fabian (playing the unflappable Lucie de Graffe) make them magnetic presences on the screen. Pierre Baillot as the lanky actor Quentin and Jean Bouise as the academic Warok bring the most humanity to their roles. The improvisation in the narrative scenes do sometimes lose momentum as actors get lost in the moment or don’t know where to go. That Rivette leaves such cuts in the film reflects his thematic intentions with acting and play, contrasting the conditions of role-playing.

At about twelve-and-a-half hours, the movie is certainly not without stretches of tedium. There’s an ill-advised scene with two toddlers, a dog, and a turtle. Rivette lets an ethnologist drone on and on about his work (though this could be an opportune time for the viewer to grab some quick shut eye). Much of episode four through six is underwhelming compared to the rest. And Out 1 is clearly not for everyone. It’s a hardcore art film with all the obliqueness, non-narrative flourishes, and sometimes downright impenetrability that comes with the territory. In terms of bang for the buck or more importantly time, several other Rivette films are more worthwhile. But if you truly love movies and the French New Wave in particular, Out 1 most definitely merits viewing. What one can say after the experience is that there is nothing else quite like it in all of cinema.