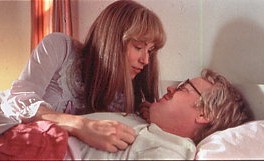 Owning Mahowny is based on a book by Gary Ross that documents the true story of Brian Molony, a bank officer who was a compulsive gambler and embezzled millions of dollars to support his habit. For unknown reasons, Brian Molony here is renamed Dan Mahowny (Philip Seymour Hoffman), just promoted to assistant branch manager of a large Toronto bank. Early shots of a huge vault door swinging open and omnipresent security cameras establish the physical care with which the bank’s assets are guarded. But there’s always a human factor to security and Mahowny is nothing if not human. He drives a dirty, sputtering old heap of a car, wears ill-fitting suits, and cautions his girlfirend, Belinda (Minnie Driver), about a proposed dinner out that might run more than thirty dollars.

Smart, efficient and respected by his boss, Mahowny overcomes management resistance to granting a loan to a wealthy client by quietly pointing out to them how much money they are already making on the account. A large line of credit is granted which later provides Mahowny’s opportunity for skimming and kiting. More important is the trust of his boss who lightly raises questions about various transactions and then is easily satisfied with Mahowny’s answers, blithely signing off in reliance on the word of his subordinate. Big mistake.

For Mahowny is a compulsive gambler. Compulsive gambling is recognized by the American Psychiatric Association as an impulse control disorder, in the same category with kleptomania and pyromania. This isn’t just a guy who puts a bit more on the craps table than he can afford. It’s a guy who is out of control. He’s utterly preoccupied with gambling, he needs to gamble with increasing amounts of money in order to achieve the desired high, he lies to those around him to conceal his habit, and he puts his career and personal life at risk in order to pursue his compulsion. Owning Mahowny draws a textbook case of the disorder in this otherwise most ordinary man.

Starting with a local bookie, Mahowny moves on to a casino at Atlantic City where a smarmy and manipulative manager (John Hurt) is all too pleased to encourage a big player. As Mahowny’s losses multiply, he embezzles ever larger sums from the bank, playing ever larger stakes at the tables. He has a minor scare when a bank auditor raises some questions, but Mahowny manages to finesse that situation and postpone the inevitable.

Hoffman is particularly adept at portraying somewhat nerdy characters with inner conflicts, such as the young widower overcome with grief in Love Liza and the schlumpy public school teacher in 25th Hour. Here he etches a portrait of an ordinary guy with an extraordinary problem with his usual conviction. It’s a convincing and subtle portrayal, but also raises the question whether Hoffman is in trouble of starting to repeat himself. Driver is a pleasant surprise as Belinda. With an American accent, wearing a blond wig done in an impeccably tacky hairdo, she is loyal to her man even after enough repeated betrayals to drive a Methodist to drink. She strikes just the right note of ordnariness to make the pairing of the two seem credible.

It’s Hoffman’s character study that centers the film, but there’s only so much that can be done with that in terms of narrative drive. What suspense there is lies in how he will be caught and that is rather weakly plotted in the script. Wire taps seem to be carried on by Canadian authorities with a good deal of freedom and are the source of the leads that ultimately bring down the house of cards. The mushrooming of Mahowny’s betting and his repeated thefts of funds from the bank provide a certain intrigue and momentum, but failing any real interest in the investigative side of the story it does tend to lag noticeably in midpoint.