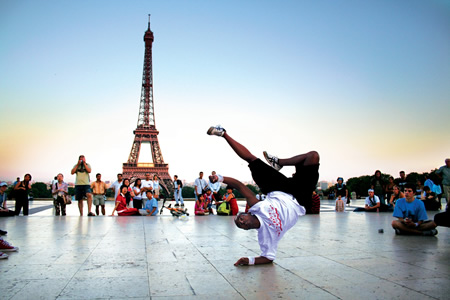 Directed and Edited by Benson Lee

Don’t let the title confuse you. This is not a film about boys from Planet B. The B in B-boy stands for beat, and the term b-boy refers to breakdancers. It turns out that breakdancing used to be called “b-boying,” before it became an 80s phenomenon whose flame died out pretty quickly, though not before the moves were integrated, and dumbed down, by the mainstream. The street dance that was born in the Bronx in the 70s may have lost some of its verve here in the States, but it still thrives in adolescent boy cultures around the world. And the b-boys featured in Planet B-Boy are the best in the world, literally, and the film honors them by showing the best of the best showing us the best they can do, and boy, is it out of this world.

The film starts with a brief explanation of hip hop culture and the dance form that evolved along with it. Breakdance started out as a kind of urban battle of movement, where one dancer challenges another with a move, and the challenger responds with another move. It was a form of individual expression among the gangs and other urban kids, just like graffiti art and emceeing (rapping). As a dance, it took a lot from other dance moves that were already a part of black and immigrant Puerto Rican culture, like the footwork of James Brown, and a lot of its power moves came from gymnastics and martial art forms like Kung Fu. (Breakdancing, by its very nature, demands a truckload of upper body strength, which is why, in its extreme form, it has always been primarily a dance for boys.)

After this introduction, the film goes right into what its real mission is, and that is showcasing the best b-boys in the world. It turns out there’s a competition that b-boys aspire to winning the first time they ever do a freeze, a head spin or an air flare; it’s like the Olympics for athletes. It’s called the Battle of the Year, the brainchild of a truly obsessive German breakdance fan in 1990, and it’s held every year in the otherwise nondescript town of Braunschweig Germany.

When director Benson Lee decided to document the 2005 Battle of the Year, he chose five out of the 18 teams that were selected to compete during the regional elimination rounds, and went to their countries to interview the dancers as they were perfecting their routines and getting ready for the competition. It turns out that winning the Battle of the Year could be a ticket to a better life for many of these young boys, most of whom fit the b-boy demographic of street youths who have a lot of time on their hands and not a lot of money to distract them from training. It becomes obvious early on that the teams featured are filled with kids from poor or working class families, and rigorous training is necessary to compete on the extreme level these boys are dancing at.

The teams come from every corner of the world, but, interestingly, three of the top five are from the Far East—maybe it’s the Kung Fu influence, or fewer distractions, or a Buddhist-like dedication to physical mastery, and obliviousness to pain. Two of the crews are from South Korea, one from Seoul and one from a small town in the southern part of the country; the other oriental team is from Osaka, Japan. A European team, from Chelles, France, is a true immigrant’s tale of finding meaning and a sense of community in this contemporary American dance form. The team from the United States, where it all started, is from Las Vegas, ironically the city where culture is defined as entertainment. The Vegas boys really are trying to make a buck, and that Strip mentality shows.

Although some of the personal stories that Mr. Lee uncovers during his interviews border on the mawkish, the overall effect of showing these boys’ devotion to a dance form that gets so little affirmation in society is quite moving. But all this is just preparation for the real reason to go see this movie, and that is the dances themselves.

The footage of the competition dances at Battle of the Year is incredible—although at times choppily edited, it’s still raw and exhilarating. The control these boys have over their bodies, and the power they exert, makes for some tremendous dancing. Of course, there are the requisite show-stopping head spins, but who knew a boy could slide across the floor on his neck and shoulder, that he could stand on one hand and then crook the elbow to rest on the forearm and then do one-forearm pushes, that he could contort his body into a pretzel shape before leaping off that measly little forearm only to morph into an entirely different contortion revealing yet another wonder at the human body’s capacity to bend and move. B-boys crawl on their hands only, the rest of the body suspended in space horizontal to the floor; they move fast as lightning only to freeze in a split-second; they sail through the air, and then fall flat on their backs. You keep feeling like you’re watching a cartoon, only you know it’s live action.

But the power moves are not all that b-boying is about, as this documentary, the Battle of Year, and the b-boys themselves keep reminding us. It’s also about self-expression, about how the individual uses his entire body to express whatever he is feeling, to unhinge the rage and sheer adrenaline rush that’s in his gut, and yes, to respond to the beat, the music, as well.

After watching this movie, I felt as though every nerve ending in my body was shooting sparks. No wonder these boys dedicate their lives to this dance. It’s electrifying.